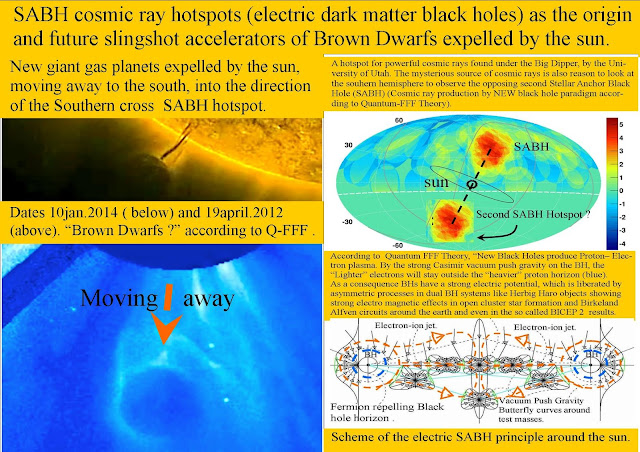 About the cosmic ray hotspots:A hotspot for powerful cosmic rays found under the Big Dipper, by the University of Utah. The mysterious source of cosmic rays is also reason to look at the souhern hemisphere to observe the opposing second Stellar Anchor Black Hole (SABH) (Cosmic ray production by NEW black hole paradigm according to Quantum-FFF Theory).http://vixra.org/pdf/1104.0002v2.pdf vixra.org/pdf/1104.0002v2.pdfsee also : http://www.sciencedaily.com/.../2014/07/140708092910.htmand wikipedia Icecube Strange cosmic ray hotspots stalk southern skies, or pinning down the cosmic ray source by IceCube: stating that the radiation comes within a southern circle of 15 degrees !! 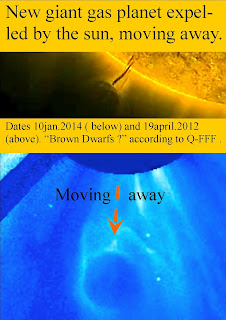 New giant gas planet ( Brown Dwarf?) expelled by the sun, moving away at different dates 10-jan.2014 and 19 april 2012.
According to Quantum FFF Theory, the sun is the remnant of an open star cluster in between two Herbig Haro Bowshocks or SABHs ( Stellar Anchor Black Holes). Our sun seems still to spit out so called failed stars, if it reaches its instability boundary.
This boundary is supposed to be related to the size of the both SABHs. which create vacuum polarization of a certain strength, in between at the solar location. 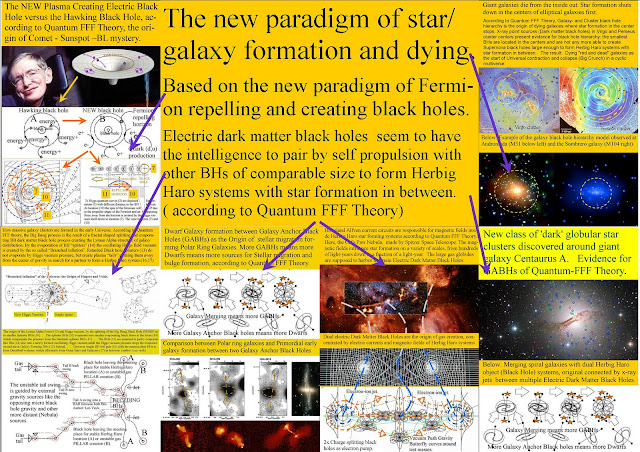 CONCLUSION:
So called super stellar nurseries only form in between two or more large new physics black holes observed as Herbig Haro Bow shocks.
This seems only possible in the early universe or if Galaxy Anchor black holes meet each other inside merger galaxies.
In more recent galaxies we find open star clusters as the result of Supernova nebula produced black holes.
The single SN black hole has to travel far to find a partner to form an HH system. (Carina nebula) https://www.flickr.com/photos/...
The multiple "sunspot" black holes ( much smaller) however are supposed to take over the forming of Herbig haro systems.( ESO 9934) So, dependent of the size of these starspot black holes HH systems will be formed to form Bok globules with open star clusters producing real stars, or Bok globules to form smaller open star clusters producing smaller "hula hoop" stars ( or failed stars) in between. ............. The sun is not growing. It seems to be stable balanced by plasma production around sunspot black holes and inflow from space, versus constant giant plasma sphere spitting. ....................However as a consequence, it is not clear that our sun has been the center of a full functional open star cluster in the past, based on the recent production of small failed star plasma balls. ................. Probably both polar SABHs ( Stellar Anchor Black Holes) are not large enough even not in the past. see also Bok globule ( ESO 9934) and spitting chaines of failed stars or plasma balls:  https://www.flickr.com/photos/93308747@N05/16865221503/in/dateposted-public/  and http://vixra.org/pdf/1505.0101...