Why are early galaxies so strangely compact? 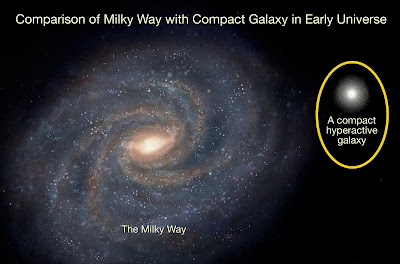 Why are early galaxies so strangely compact?
Early Galaxies show a much larger mass-star content ratio than we do inside our local universe.
Are these galaxies more massive (by more dark matter?) or does their gravity efficiency change, (by more dark energy content)

These hyperactive stars move at about twice the speed of our sun through the Milky Way, because their host galaxy is very massive, yet strangely compact. The scene, which has theorists baffled, is 11 billion light-years away.

Given its distance of 11 billion light-years, galaxy 1255-0 is seen as it existed 11 billion years ago, less than 3 billion years after the theoretical Big Bang.
Something wrong?
Somehow, galaxies from the young universe grow in size but not in mass– they spread out but maintain their overall heft – to become the high-mass full sized galaxies we see today. 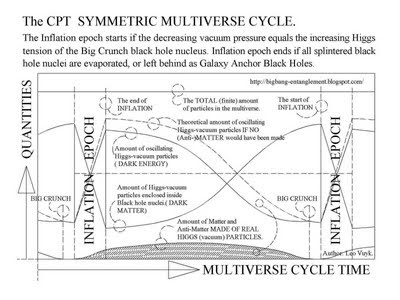 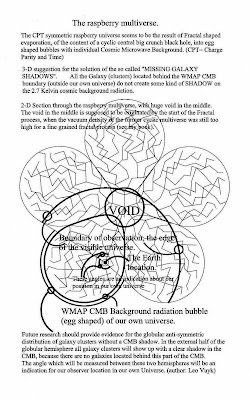 In my perspective, there are two options:
Are these galaxies more massive (by more dark matter?) or does their gravity efficiency change, (by a larger dark energy content)
If Higgs vacuum particles are able to change into matter and radiation, then matter is concentrated space, then we may presume that the gravity efficiency is decreasing over time after the big bang, because the local dark energy content (or Higgs energy) is decreasing.
In other words, the Planck length is shorter in the early universe and the vacuum as a result is more dense and energetic in its pushing force on fermions (see double Le Sage gravity theory).
Reason to accept that the shorter Planck length is also the origin of the Hubble redshift.
As a result this is a clear support for a cyclic bouncing universe!


Question:
What is the effect of a shorter Planck length and how we could imagine spacetime effects?
In my perspective, a shorter Planck length should not influence the local time created by the oscillations of a caesium atom.
The caesium atom oscillations are supposed to be related to a fixed number of collisions with Higgs particles which are supposed to be active along the chiral 3-Dimensional vacuum lattice.
If all the Higgs oscillations in the whole universe are synchronized going up and down at the same moment, then the local time is independent of the length of the Planck trajectory length.
Geplaatst door Leo Vuyk op 05:40 Links naar dit bericht