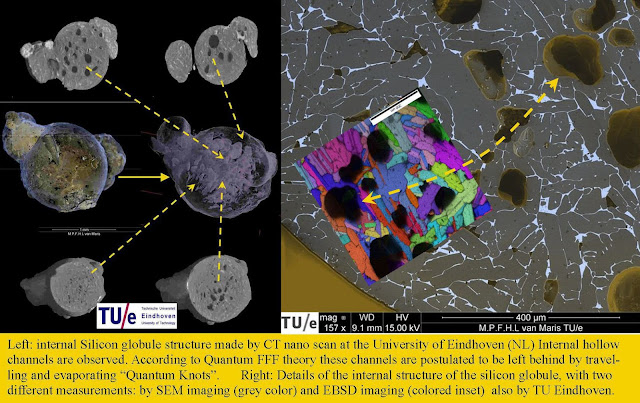 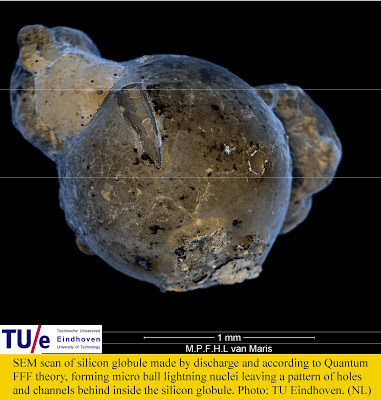 FOR THE PATTERN OF HOLES INSIDE THE SILICON GLOBULE SEE
CT-SCAN AT DIFFERENT SECTIONS BELOW (TU Eindhoven nl.)
The different microscopic dark matter Ball Lightning nuclei seem to heat up, expand the silicon matter and push smaller silicon bubbles outside the main globule leaving a pattern of holes and channels behind. 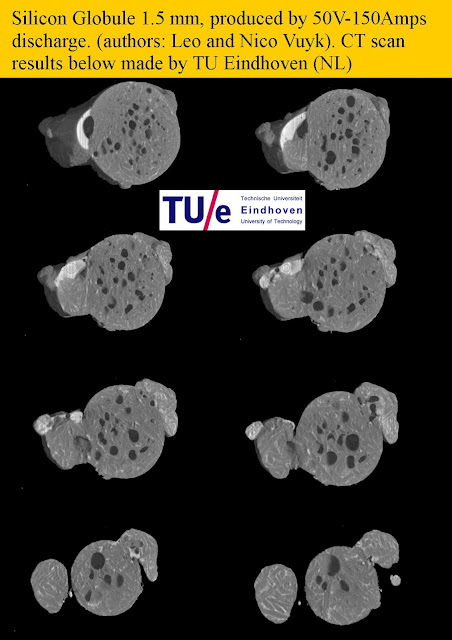 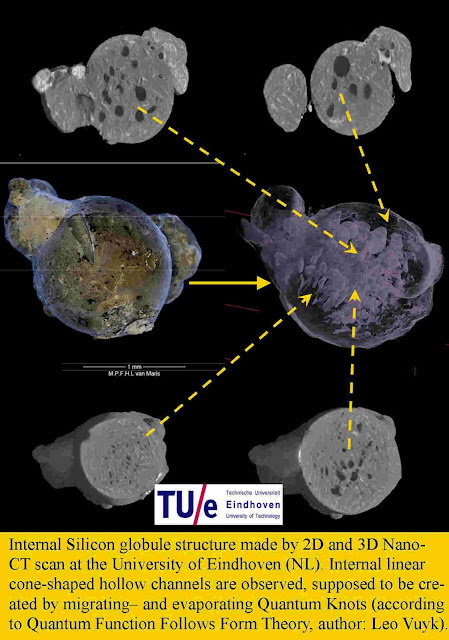 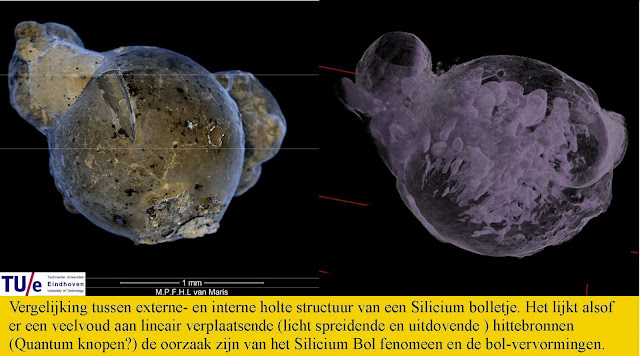 How QUANTUM KNOTS (micro black holes) are supposed to be formed by the composition of THREE magnetic photons ((B) silver colour) and the help of the Silicon molecular structure. 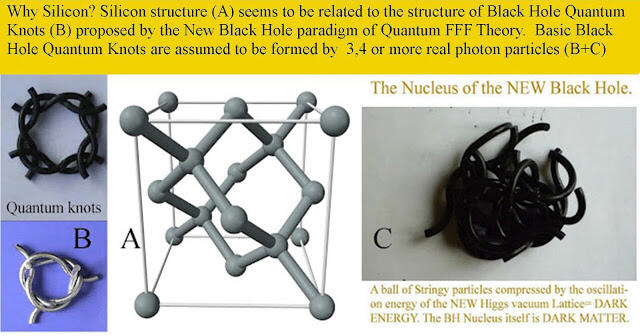 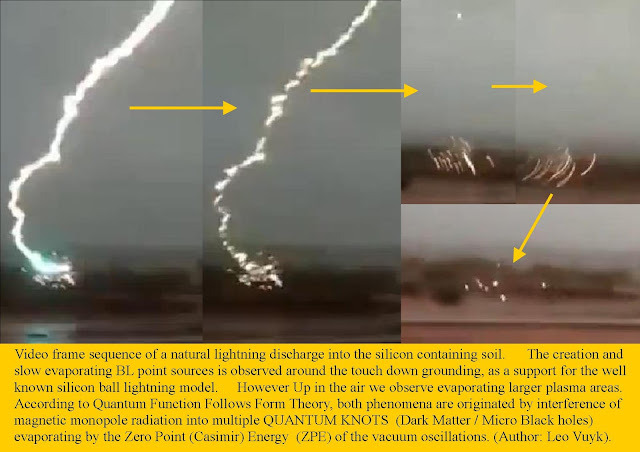 For Quantum Knots with 4x photons we seem to need not Electomagnetic but x-ray or laser interference as already is obseved , see below: 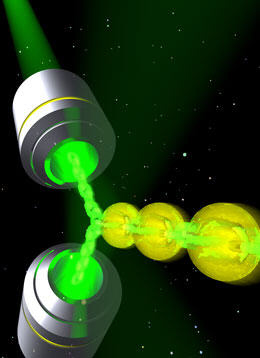 
In addition to my former blog letter:
Mainstream scientists like professor G. 't Hooft, are not accepting any ideas about the multiverse and Pilot waves or entanglement of copy universes inside the multiverse (as Q-FFF theory does)
see below:
GERARD 't HOOFT ON CELLULAR AUTOMATA IN STRING THEORY.
http://www.math.columbia.edu/~woit/wordpress/?p=5022
If you like the many world interpretation, or Bohm’s pilot waves, fine, but I never thought those have anything to do with the real world; my interpretation I find far superior, but I just found out from other blogs as well as this one, that most people are not ready for my ideas. Since the mud thrown at me is slippery, it is hard to defend my ideas but I think I am making progress.

Could you explain why you think the Bohm theory is rubbish? It seems to me that it has already done exactly what you are trying to do — provide a perfectly consistent alternative to the standard approach in quantum mechanics.
I also don’t think that you are siding with Einstein on quantum mechanics. Einstein made clear that he did NOT think something like Bell’s inequality could exist, but it DOES! He was very clear that his thinking would change if something like a Bell inequality was discovered, in particular it would lead to something along the lines of a Bohm interpretation. 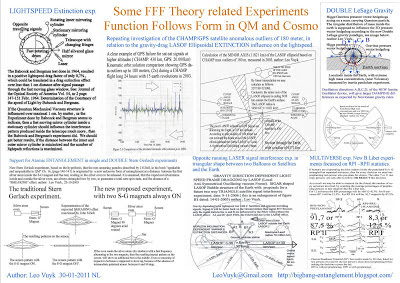 Abstract.
The Qunatum-FFF model combines some old dissident ideas of 5 well known physicists, with a new Dual-Universal Big Bang without broken symmetry, and a new Dual Universal EPR (Einstein Podolski and Rosen) correlation model, coined "Big Bang Entanglement".
It was Abdus Salam who proposed that quarks and leptons should have a sub-quantum level structure, and that they are compound hardrock particles with a specific non-zero sized form. Jean Paul Vigier postulated that quarks and leptons are "pushed around" by an energetic sea of vacuum particles.
David Bohm suggested in contrast with The "Copenhagen interpretation", that reality is not created by the eye of the human observer, and second: elementary particles should be "guided by a pilot wave", which also could be transformed into a transactional interpretation between copy universes:
https://en.wikipedia.org/wiki/Transactional_interpretation
John Bell argued that the motion of mass related to the surrounding vacuum reference frame, should originate real
"Lorentz-transformations", and also real relativistic measurable contraction.
Richard Feynman postulated the idea of an all pervading energetic quantum vacuum. He rejected it, because it should originate resistance for every mass in motion, relative to the reference frame of the quantum vacuum.
However, I postulate the strange and counter intuitive possibility, that this resistance for mass in motion, can be compensated, if we combine the ideas of Vigier, Bell, Bohm and Salam, and a new dual universal Bohmian "pilot wave", which is interpreted as the EPR correlation (or Big Bang entanglement) between individual elementary anti-mirror particles, living in dual universes.
According to modern physics, the EPR correlation mechanism predict that each elementary particle that came out of the Big Bang, had a counterpart (anti-mirror) particle which was non-local EPR correlated.
These EPR correlations should now be "washed out" due to a not well understood decoherence- and annihilation mechanism, which created the so called broken symmetry of our material Universe. However this model predict that the EPR correlated anti-mirror symmetry between particles is still there, in the form of dual universal symmetry mechanism called "Big Bang entanglement"
As a result, these ideas introduced a new ontology of physics.
This was reason to introduce a new dual-quantum-correlated massless black hole. Consequently, a new type of Symmetric Semi-Cold Fractal Big Bang model arose, which is supposed to be the explosion/evaporation in succession of an earlier so called
"Big-Crunch". Quantum mechanics, and the well known EPR correlation laboratory experiments suggest, that there is always 100% correlation (or anti-mirror symmetry) between particle pairs, which are created by a "common" source and measured at equal times, no matter how far these particles are separated.
The Cold Fractal Big Bang mechanism is supposed to be the "common" source of pairs of synchronized, Big Bang Entangled particles living in different dual (anti-mirror) universes.
As a result all particles and waves participate in this Big Bang entangled guiding system which we may call: "consciousness on the quantum level".
Surprisingly, I could relate astronomical structures and cosmological phenomena like Dark Matter and Dark Energy, Schrödinger’s Cat paradox, Consciousness,
Free Will, and even the illusion of the Private Self, with this new
Dual-Multi-Universal model. 6 experiments are suggested to verify this model in the future.

"All physical theories...... should lend themselves to so simple a description that even a child could understand them."-- Albert Einstein.
I hope that I am in the same line of thought by using only geometrical explanatory imaging (see the figures) and references to new experiments supporting the Q-FFF model. 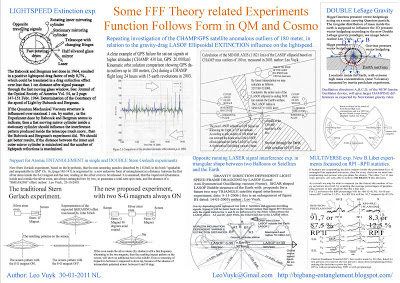