A SWARM Of Black Holes Near The Galactic Center, NO MONSTER BLACK HOLE !

A Swarm Of Black Holes Near The Galactic supermassive MONSTER black hole in the Center!http://www.sciencedaily.com/releases/2005/01/050111114024.htm

"An ongoing Chandra program that monitors a region around the Milky Way's supermassive black hole, Sagittarius A* (Sgr A*) found four bright, variable X-ray sources (circles)  EVEN WITHIN 3 light years of Sgr A*"!
"Although the region around Sgr A* is crowded with stars, we expected that there was only a 20 percent chance that we would find even one X-ray binary within a three-light-year radius," said Muno. "The observed high concentration of these sources implies that a huge number of black holes and neutron stars have gathered in the center of the Galaxy." 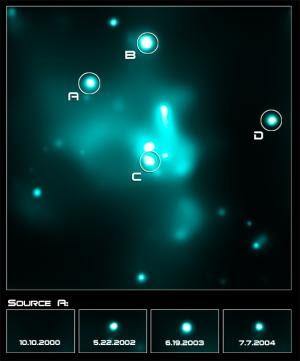 HOW CLOSE TO THE MONSTER BLACK HOLE CAN SUCH SMALL STELLAR MASS BHS EXIST before they are eaten by the monster, 3 lightyears?

ANSWER: THERE IS NO MONSTER BH IN THE CENTER OF SPIRAL GALAXIES.

THERE IS ONLY A LOCAL WHITE (GREY) HOLE IN THE LOCAL VACUUM STRUCTURE ORIGINATED BY AT LEAST TWO PRIMORDIAL MONSTER BHs LOCATED OUTSIDE THE GALAXY!