Abstract,
According to Quantum FFF Theory, the FORM and MICROSTRUCTURE of elementary interlocking particles, is supposed to be the origin of FUNCTIONAL differences between Higgs- Graviton- Photon- and Fermion particles.
As a result, a NEW splitting, accelerating and pairing MASSLESS Black Hole seems to be able to convert vacuum energy (ZPE) into real electric energy by entropy decrease (nuclear  electric potential) and is responsible for all dark matter in the universe.
The electric energy production of Stellar Anchor Black Holes (SABHs), seem to be able to explain quick Star- and Galaxy formation, Birkeland Currents and Herbig Haro Objects. However, smaller (magnetic interference) Black holes are supposed to be responsible for Sunspots, micro-Comets and even Ball Lightning. 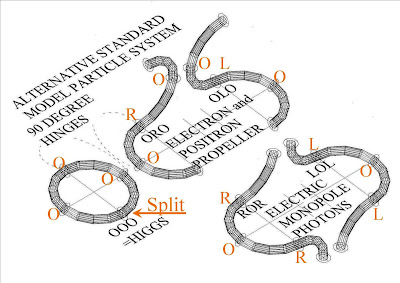 Introduction.
The Electric Universe paradigm proposed by David Talbott and Wallace Thornhill, describes that universal electric phenomena should be the origin of poorly explained universal phenomena like fast Star- and Galaxy formation, dust pillars, dumbbell- and cone shaped planetary nebula, and Cosmic Plasma phenomena like stellar and galactic Birkeland currents etc. (fig 1,2)  [Ref.. 23]
In Quantum FFF theory however, these electric phenomena are assumed to be originated by the electric potential and vacuum polarisation influences of new Paradigm Black holes.
New paradigm Black holes are supposed to come in various sizes spread through and around the Galaxy. In contrast with  mainstream physics, the small (stellar mass) Black holes are in most cases located in the centre of  galaxy and the Giant Black holes are located outside the galaxy..

Quantum FFF ( Function Follows Form) theory states, that the vacuum is seeded with fast oscillating massless Higgs particles (dark energy) , oscillating along a complex chiral tetrahedral vacuum lattice, which has the ability to transfer Photon and Graviton FORM information in bunches of oscillations (in wave form) , through the vacuum lattice with the local speed of light. Ref [13,18,21]. As a consequence there are no attraction forces on propeller shaped Fermions. Gravity seems to be the result of two different impulse arrays:  the massless Higgs impulse array and the (less effective) massless Graviton impulse array.
As a consequence, new paradigm Black holes suffer only from the gravitational influence of Higgs vacuum (photon) impulses also coined Casimir push-gravity, because no gravitons can escape from the Black hole. The Black hole is supposed to be a super dense knot of Higgs particles floating inside the oscillating Higgs vacuum frame. (Fig. 6) and (Ref. 7,8,9,11,13,17).
No photons like gravitons can escape from the Black hole. However, in Q-FFF theory, the vacuum is constantly “eaten” by these NEW Black hole nucleus and the origin of the Casimir  gravity effect of Black holes..
In the Q-FFF model, Fermions are assumed to have a propeller shape equipped with a left- or right hand “pitch” Quarks and some leptons are compound particles (with photonic gluons) however, electrons and positrons are singular. (Ref. 18 )
Only the statistical sum of the different kinds of vacuum impulses ( butterfly shaped vector arrays) by real collisions from all directions on Fermions are responsible for all (energetic) phenomena in the universe. (Fig 3,4)
New Black holes are assumed to create an electric potential between the positive charged nucleus (positrons and quark soup) and the negative charged globular electron shell around the Black hole nucleus. (Observed during ball lightning production Ref. 8.)
As a consequence the polarisation of Fermions around Black holes is the origin that Black holes are equipped with a narrow Fermion repelling globular horizon as a result, Black holes are Zero Point Energy driven electric generators with negative charge at the outside and positive charge at the inside.
The Fermion repelling horizon of Black holes (fig.7,8,9) is also the origin of acceleration and pairing phenomena  of binary Black holes leading to the fast creation of Stars by Stellar Anchor Black Holes (SABHs), Galaxies, (Cygnus A: fig 5) Herbig Haro objects, the pairing of Sunspots and Birkeland currents or Alfven circuits.

The accelerating plasma tail of NEW paradigm Black holes (fig9) (Ref.17), and the splitting Black holes into smaller pairing Black holes is supposed to be the origin of a smooth proliferation of Black holes and downsizing after the big bang of star magnitudes.
The Eagle Spire Nebula, (fig. 1) the Carina and other nebulas, are examples of a smooth proliferation of Black holes through Galaxies and Nebula.
We are able to observe in these nebulas the pairing and splitting of Black holes ending up into multiple Herbig Haro objects (double stellar anchor Black hole systems) as the origin of new stars as the start of small open star clusters.
Our sun is supposed to be a remnant of a former open star cluster located in between two still active Black holes, representing the so called hotspots of a former Herbig Haro object.
The solar planets are supposed to be expelled from the ever growing Sun by instable stellar rotation effects.
As a consequence we may discriminate two different kinds of stars:
Stars accompanied by two or even more Stellar Anchor Black holes ( SABHs) and stars that have no SABHs. often travelling in tandem.
Both types of stars seem to be able to explode into Planetary nebula or supernovas, as a consequence we can observe Planetary Nebula’s  (PNs) with and without clear dual hotspots located on both sides of the symmetrical exploded gas distribution.
See figures below. 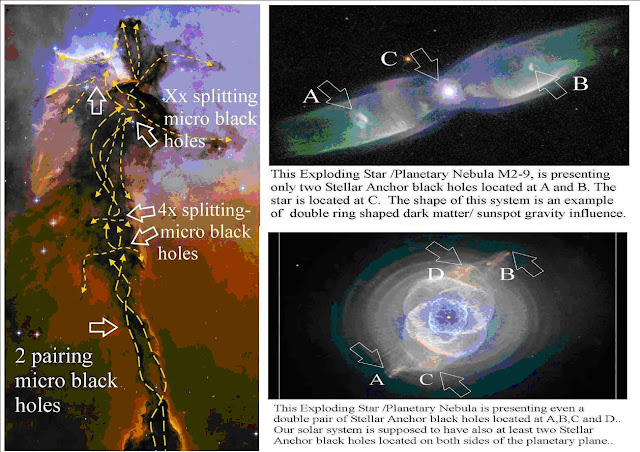 Figure 1, The Spire Eagle nebula, with two Planetary nebula, examples of the influence of Black holes in the electric universe. 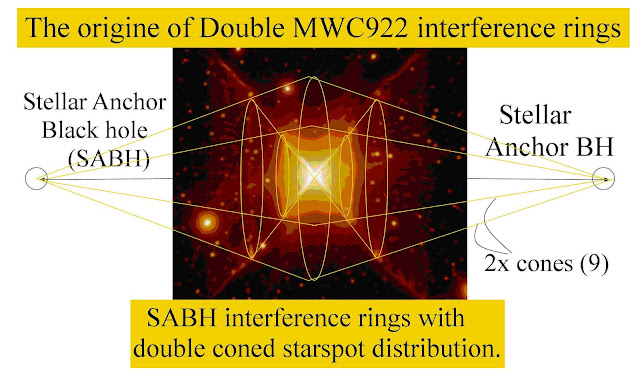 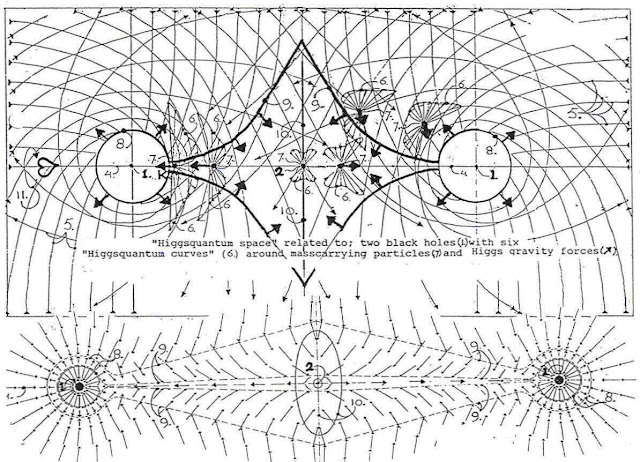 Figure  3,  Higgs Vacuum structure around a set of two Black holes, as is found to be present around Planetary nebula, early Galaxies and Herbig Haro objects. The negative charged particle jets is the result of the Black hole based electric potential combined with the vacuum polarisation (acceleration) effect on Fermions and the origin of Birkeland currents

Figure 4, The same as figure 3 with butterfly vector arrays at different locations around the Black holes. In the middle the vacuum has less density ( larger Planck lengths) by the absorption of  the dual Black holes. 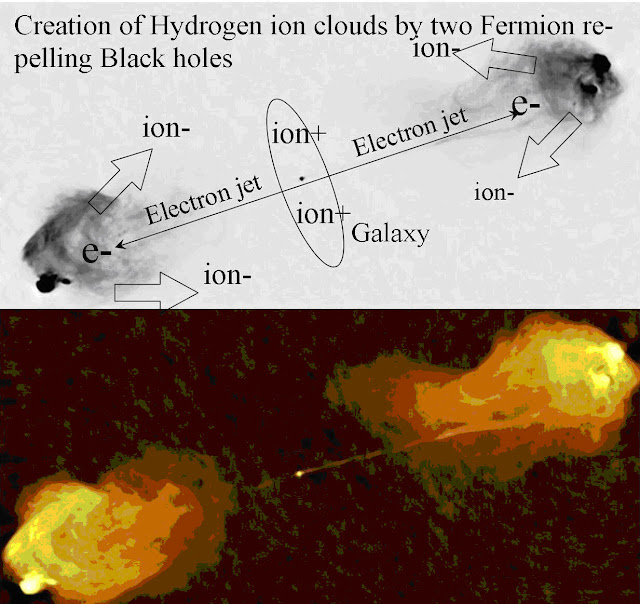 Figure 5 Cygnus A equipped with dual hotspots with gas production 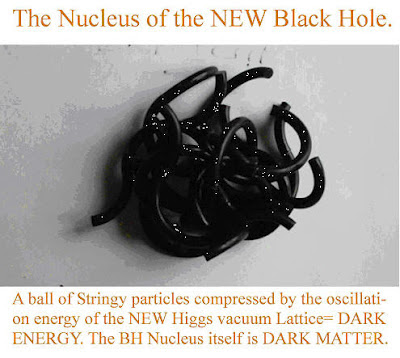 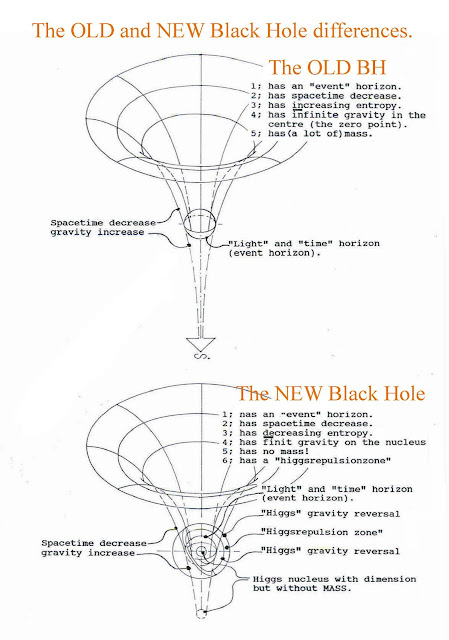 Figure 7,  The difference between the old and new Black hole. 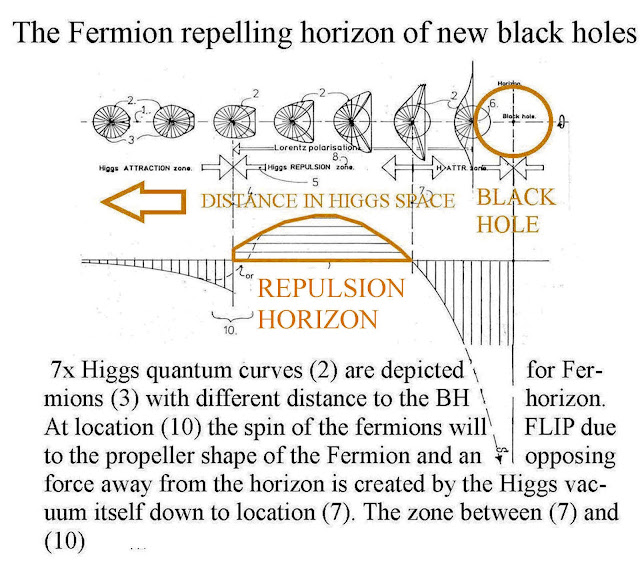 Figure  8, Principle of Fermion repulsion around a Black hole according to Quantum FFF theory by sudden Fermion polarisation. backwards from the Black Hole horizon. the FORM of Fermions is here the origin of this polarisation effects. see also Mass in motion (
viXra:1108.0006 Mass in Motion in Quantum FFF Theory) 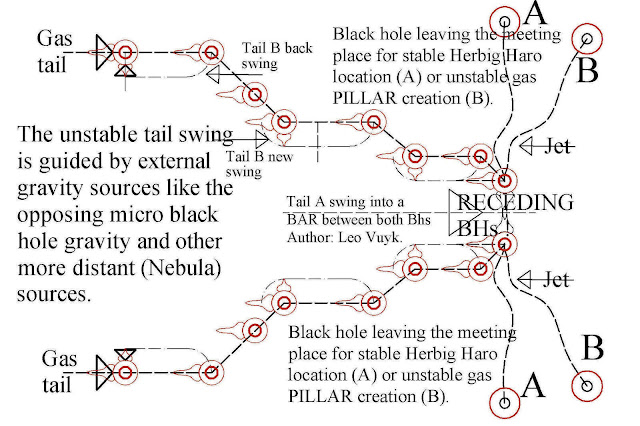 Figure 9, New Black hole propulsion by ion/dust tail, the dust Pillar creation and the pairing and spitting effect as observed in nebula like the Eagle and Carina nebula. 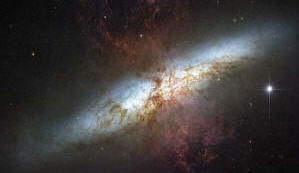