My prediction of Quantum- FFF theory that the big bang was the splitting of a giant black hole into resplitting gas producing accelerating smaller black holes, seems to be supported by this article in Sciencedaily news.
http://www.sciencedaily.com/releases/2012/03/120327215728.htm 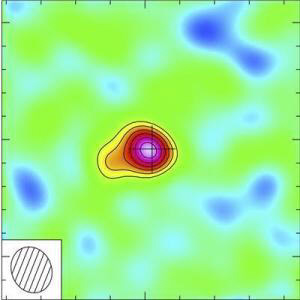 Astronomers Detect Vast Amounts of Gas and Dust Around Black Hole in Early Universe.
ScienceDaily (Mar. 27, 2012) — Using the IRAM array of millimetre-wave telescopes in the French Alps, a team of European astronomers from Germany, the UK and France have discovered a large reservoir of gas and dust in a galaxy that surrounds the most distant supermassive black hole known. Light from the galaxy, called J1120+0641, has taken so long to reach us that the galaxy is seen as it was only 740 million years after the Big Bang, when the universe was only 1/18th of its current age.
http://www.sciencedaily.com/releases/2012/03/120327215728.htm
Geplaatst door Leo Vuyk op 04:38 Links naar dit bericht