Rosetta and Comet 67P base for NEW PHYSICS ? 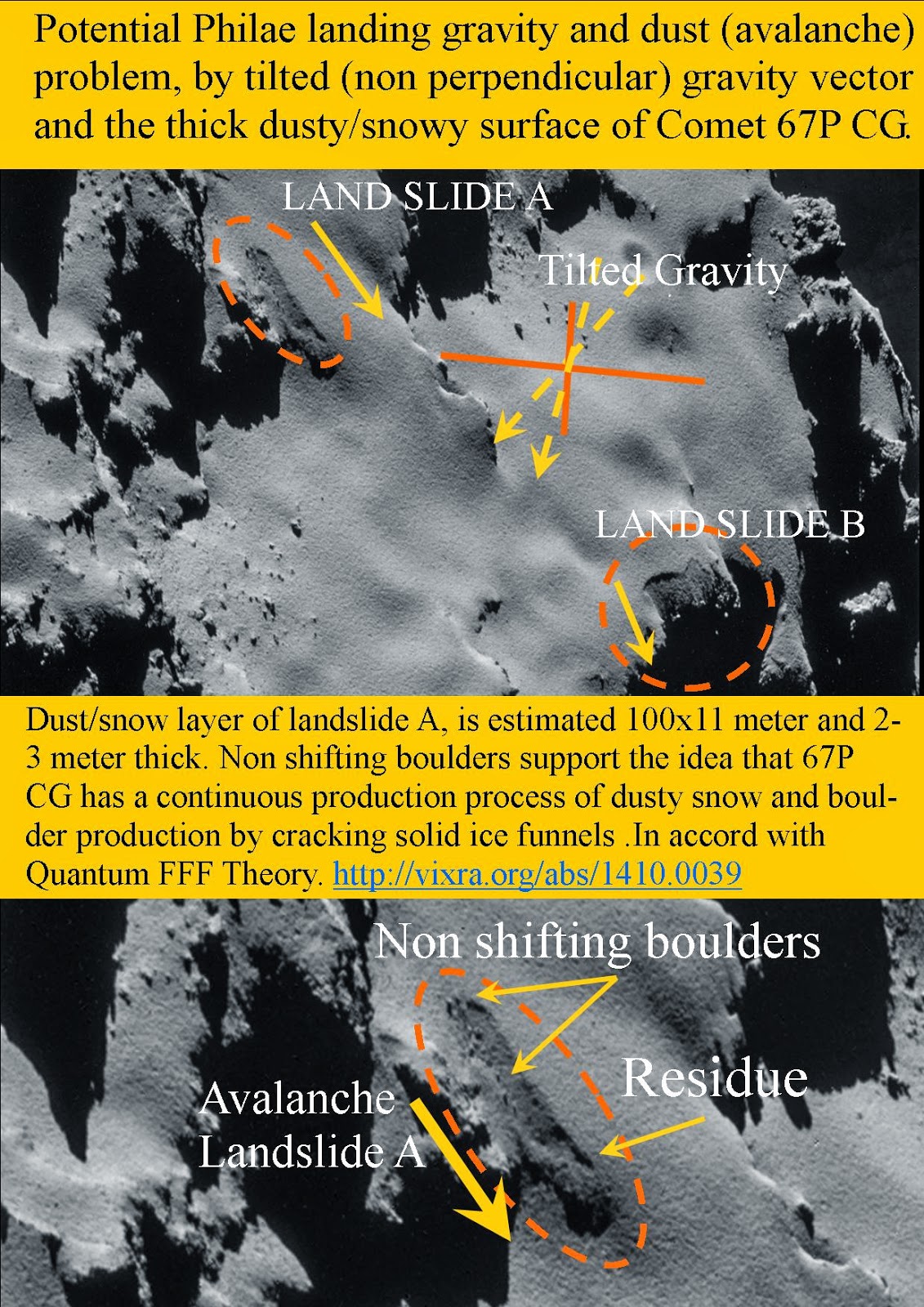 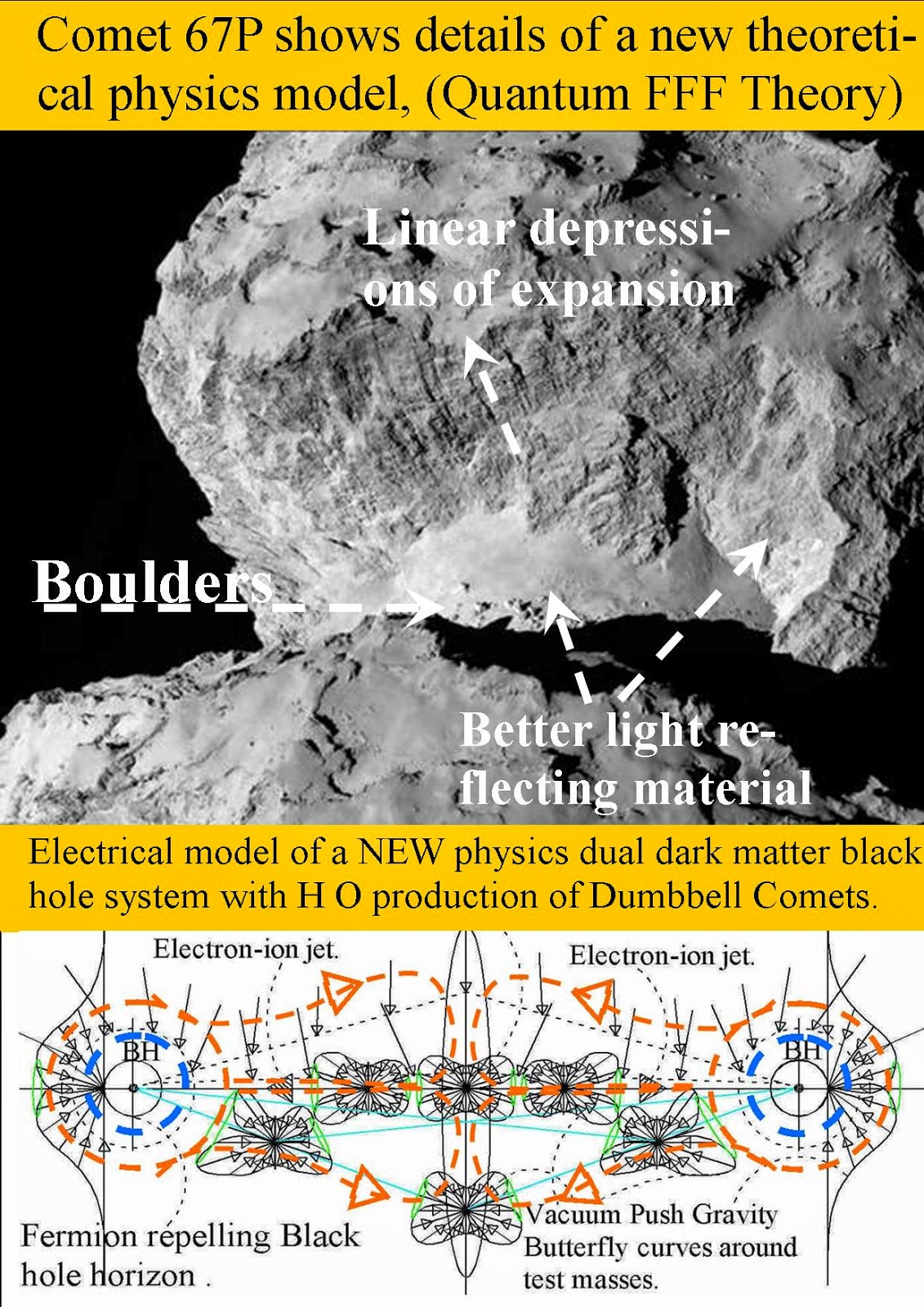 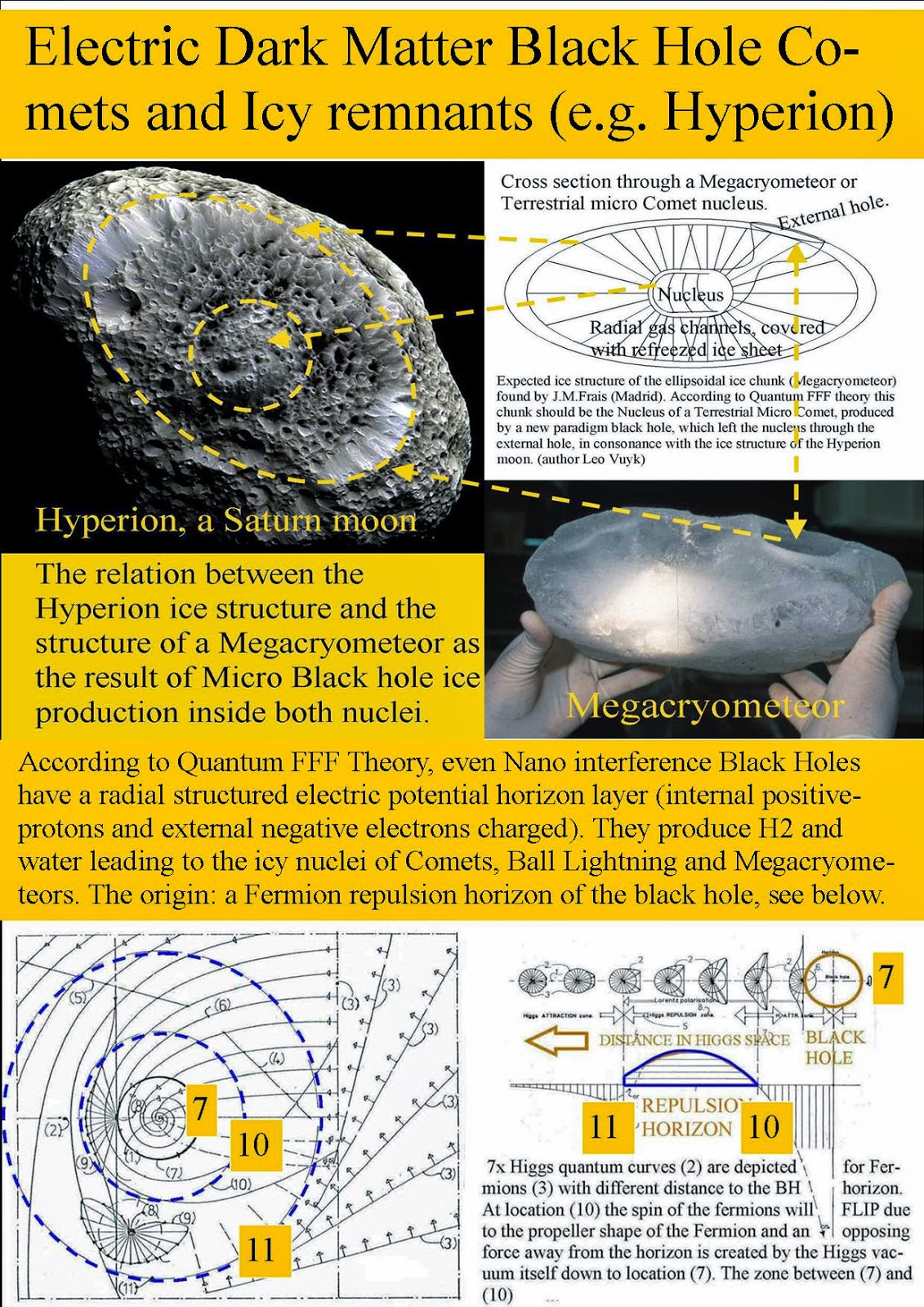 The Rosetta probe is orbitting the Comet at the moment.
Anomalies are found in the mass/volume relation of the comet ( too heavy)
Secondly it seems to expand in volume given by the linear impressions at "the head of the rubber duck".
My own interpretation of electric Comets is: that they are formed by ( new physics) micro dark matter black holes.
Comet 67P seems to be based on at least two BH nuclei.
IMHO, the smallest black hole could be interpreted as stringy quantum knot produced by electro magnetic interference at the solar surface being the start of small comets or by the so called sprites above thunderclouds. See: https://www.flickr.com/photos/93308747@N05/?details=1 and
Ball Lightning, Micro Comets, Sprite-Fireballs, Solar Bright Points and Xray/ Gamma Flashes According to Quantum FFF Theory. http://vixra.org/pdf/1104.0044v6.pdf
And : The Impossible Zero Point Electric Black Hole as the Origin of New Physics even for Comets like 67P,C-G.http://vixra.org/pdf/1402.0044v3.pdf
New physics could be found if the Comet shows also an electric and magnetic field created by both dark matter black holes expected to be the origin of a system (circuit) of Birkeland Alfven currents between them.
Also gravity anomalies should be found at both sides of the extended symmetric centerline of the rubber duck.
The huge crater at the top of the head of the duck could be a tell tale.
At the bottom of the duck there are three large craters, so this could be a sign for multiple (3?) micro BHs. 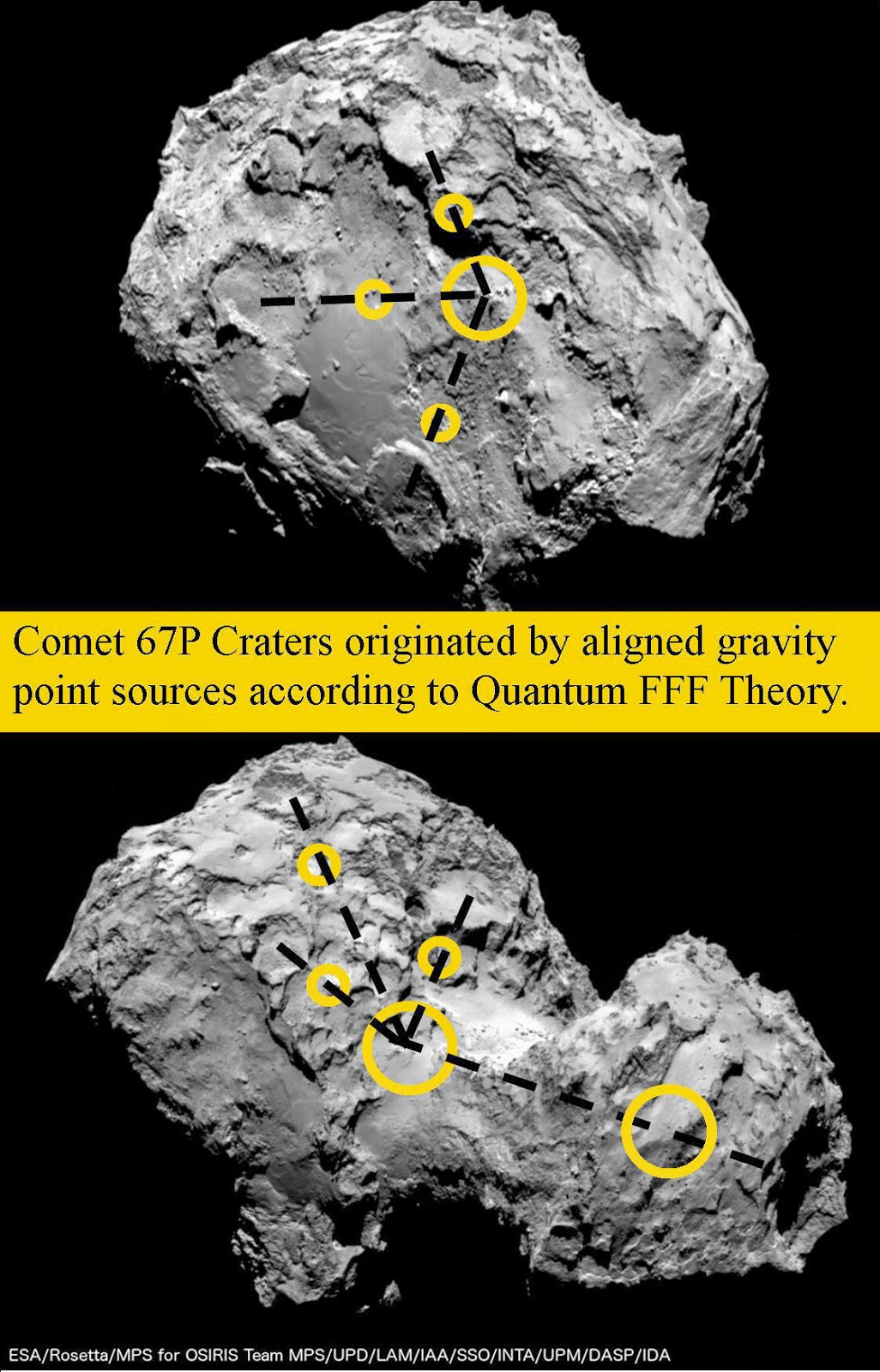 The origin of the circular craters at the surface of 67P C-G.

If we assume that all circular craters at the surface of comet 67P are originated by two aligned gravitating new physics fermion repelling micro black holes (BH), then we may get an impression of the inner BH structure of the comet responsible for the shape.
I assume that the basic dumbbell form of the comet is realized by two larger BHs and lots secondary BHs of smaller different sizes, which are concentrated in the body of the ducky located around the central main BH.
https://www.flickr.com/photos/93308747@N05/?details=1 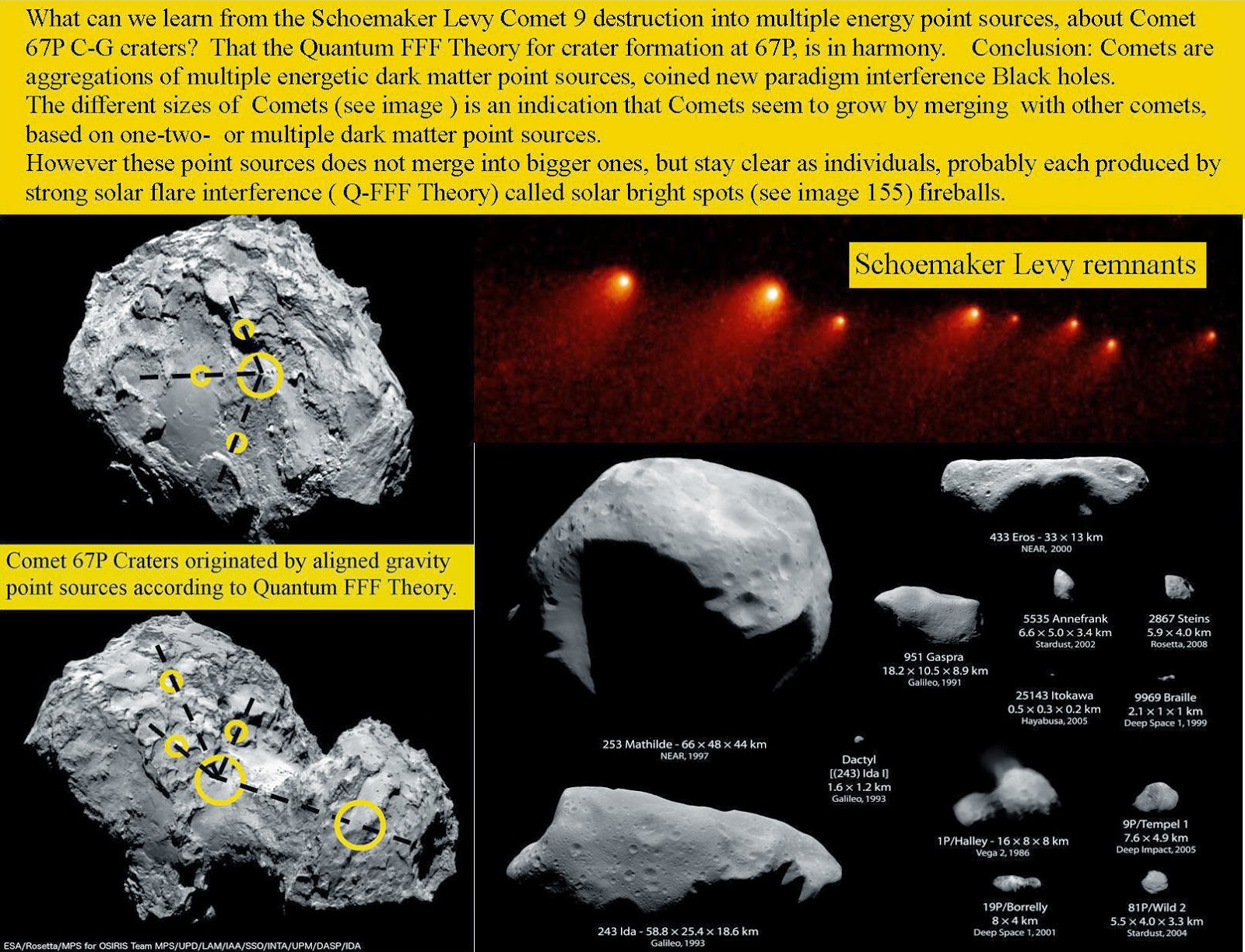 What can we learn from the Schoemaker Levy Comet 9 destruction into multiple energy point sources, about Comet 67P C-G craters?
That the Quantum FFF Theory for crater formation at 67P, is in harmony.    Conclusion: Comets are aggregations of multiple energetic dark matter point sources, coined new paradigm interference Black holes.  The different sizes of  Comets (see image ) is an indication that Comets seem to grow by merging  with other comets, based on one-two-  or multiple dark matter point sources. However these point sources does not merge into bigger ones, but stay clear as individuals, probably each produced by strong solar flare interference ( Q-FFF Theory) called solar bright spots (see image 155) fireballs. 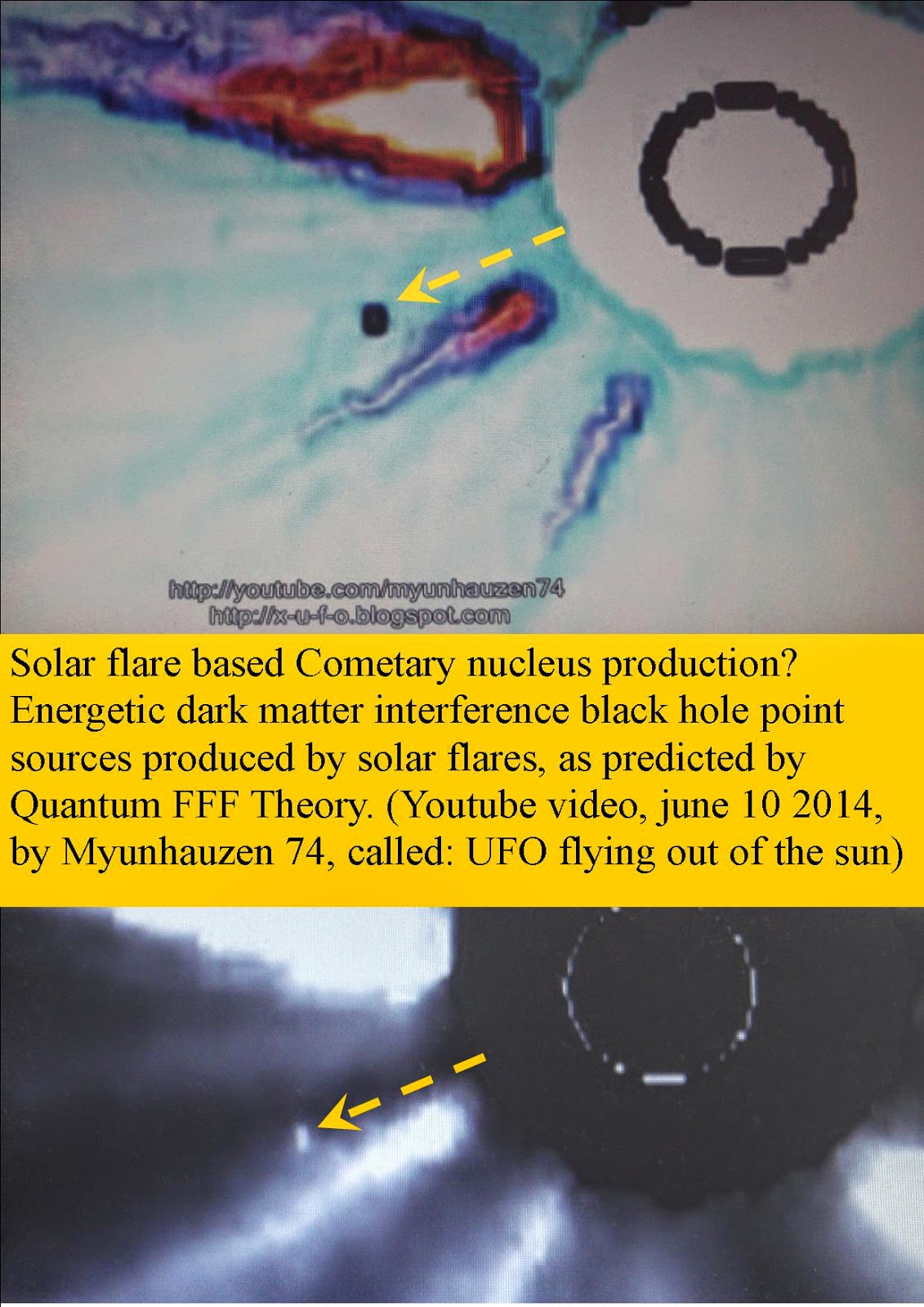 There are many parallels with earth bound fireball productions! 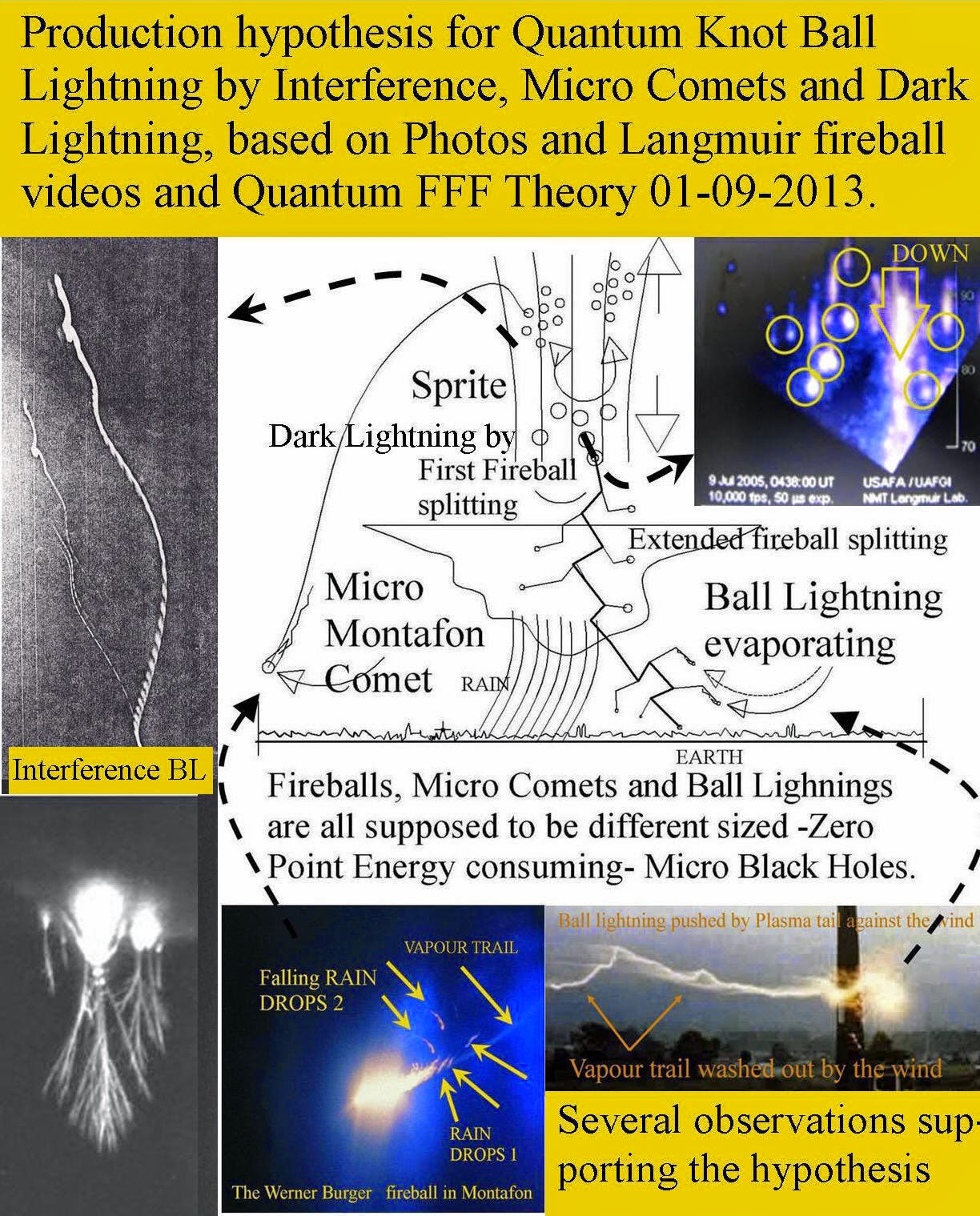 If Rosetta is able to discriminate  the peculiar dark matter gravity point sources inside 67P-CG, and the intrinsic and internal EM field, then ESA will be able to boost astro- and physics understanding more than Eddington did 95 years ago ( bending of light)
SEE: Schoemaker Levy 9 lessons for Comet 67P CG.
http://bigbang-entanglement.blogspot.nl/2014/09/schoemaker-levy-9-lessons-for-comet-67p.html 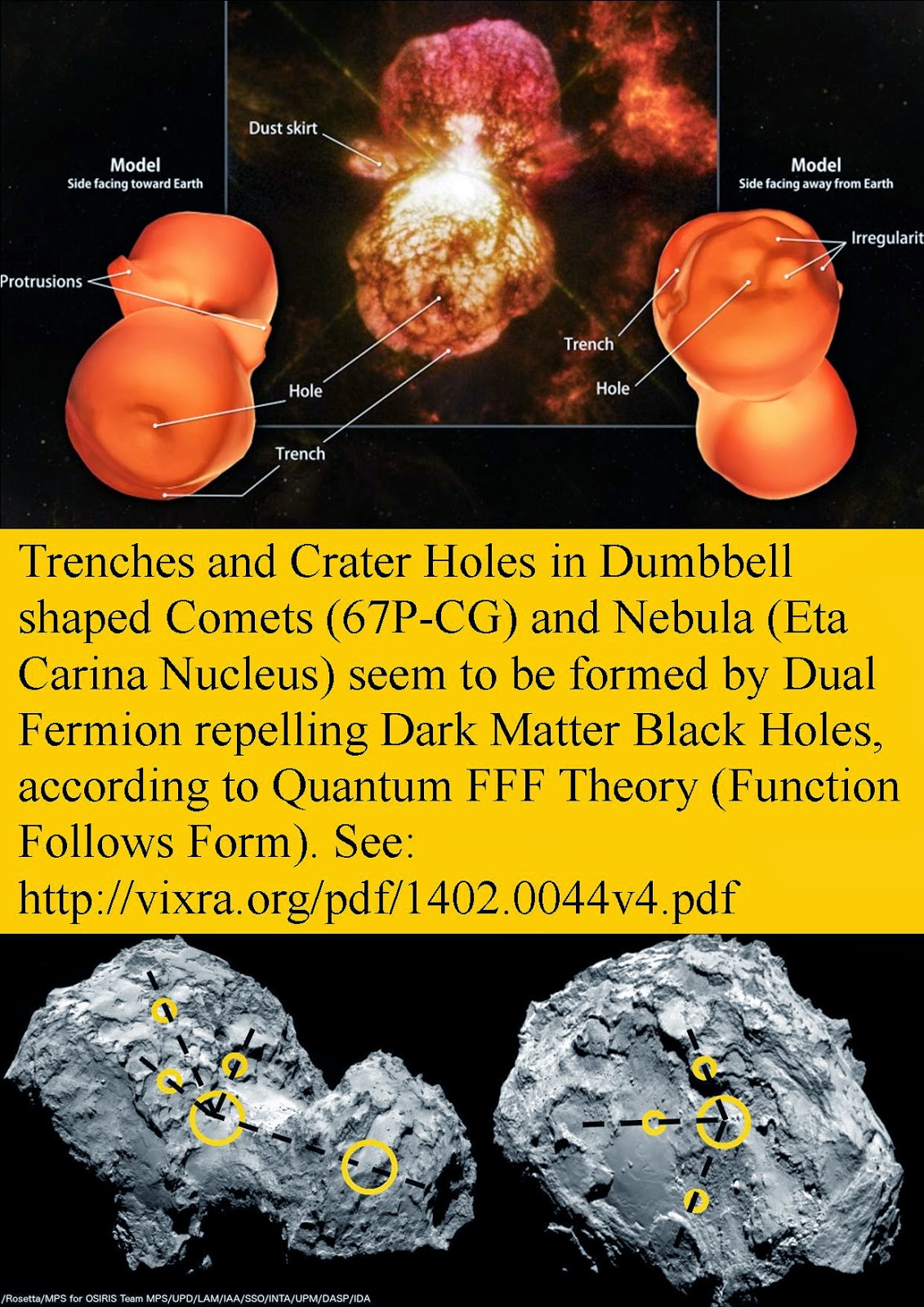 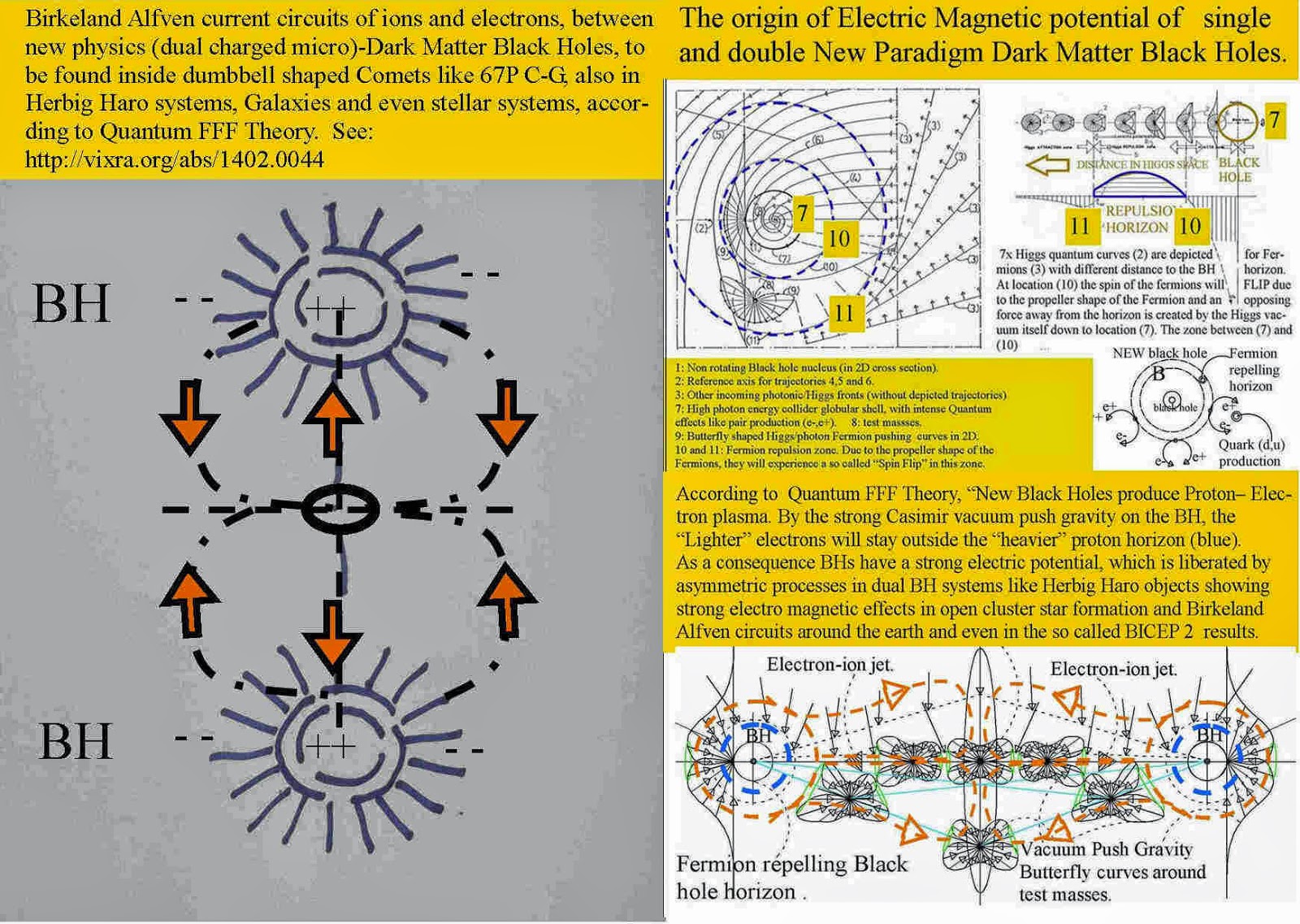 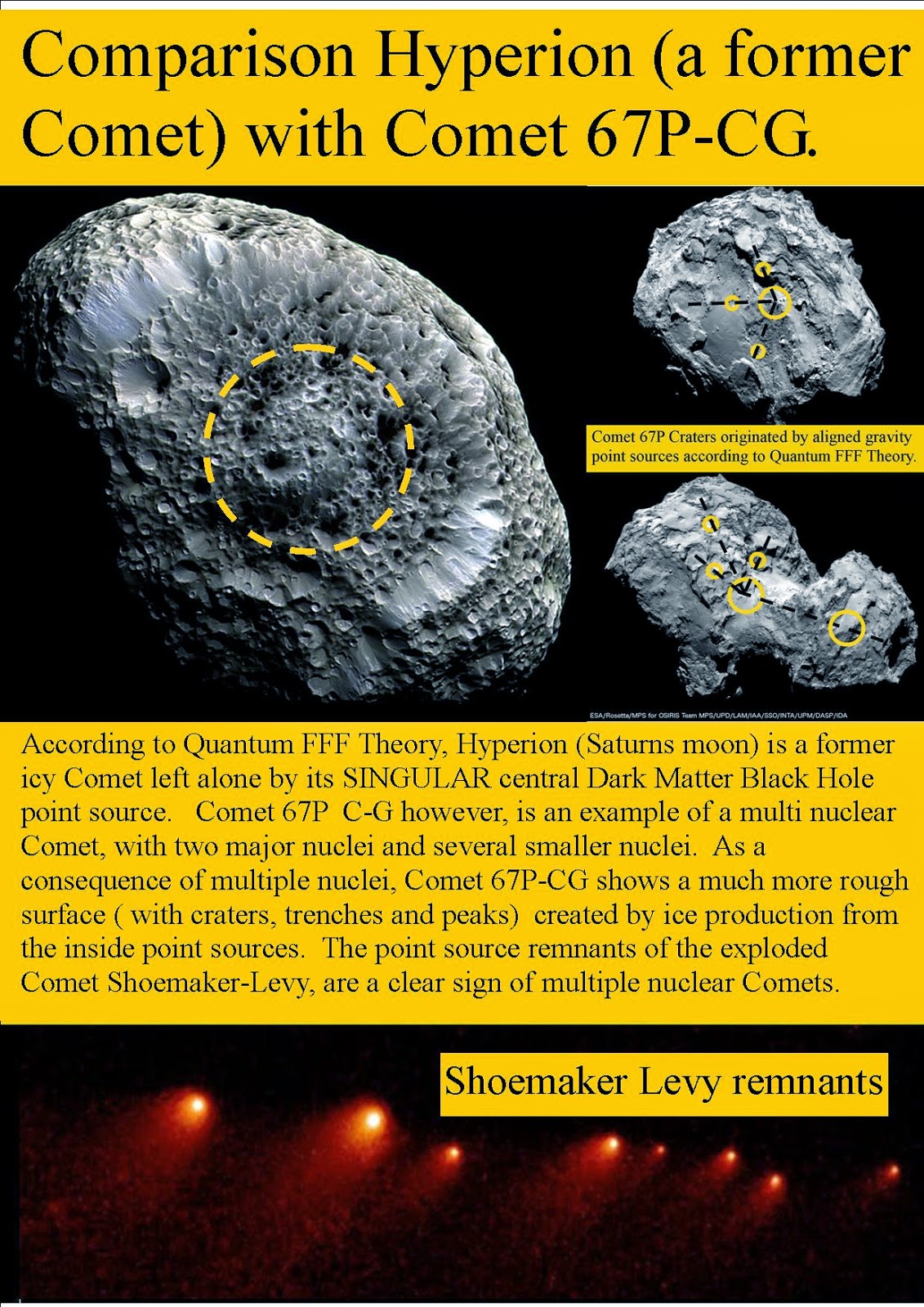 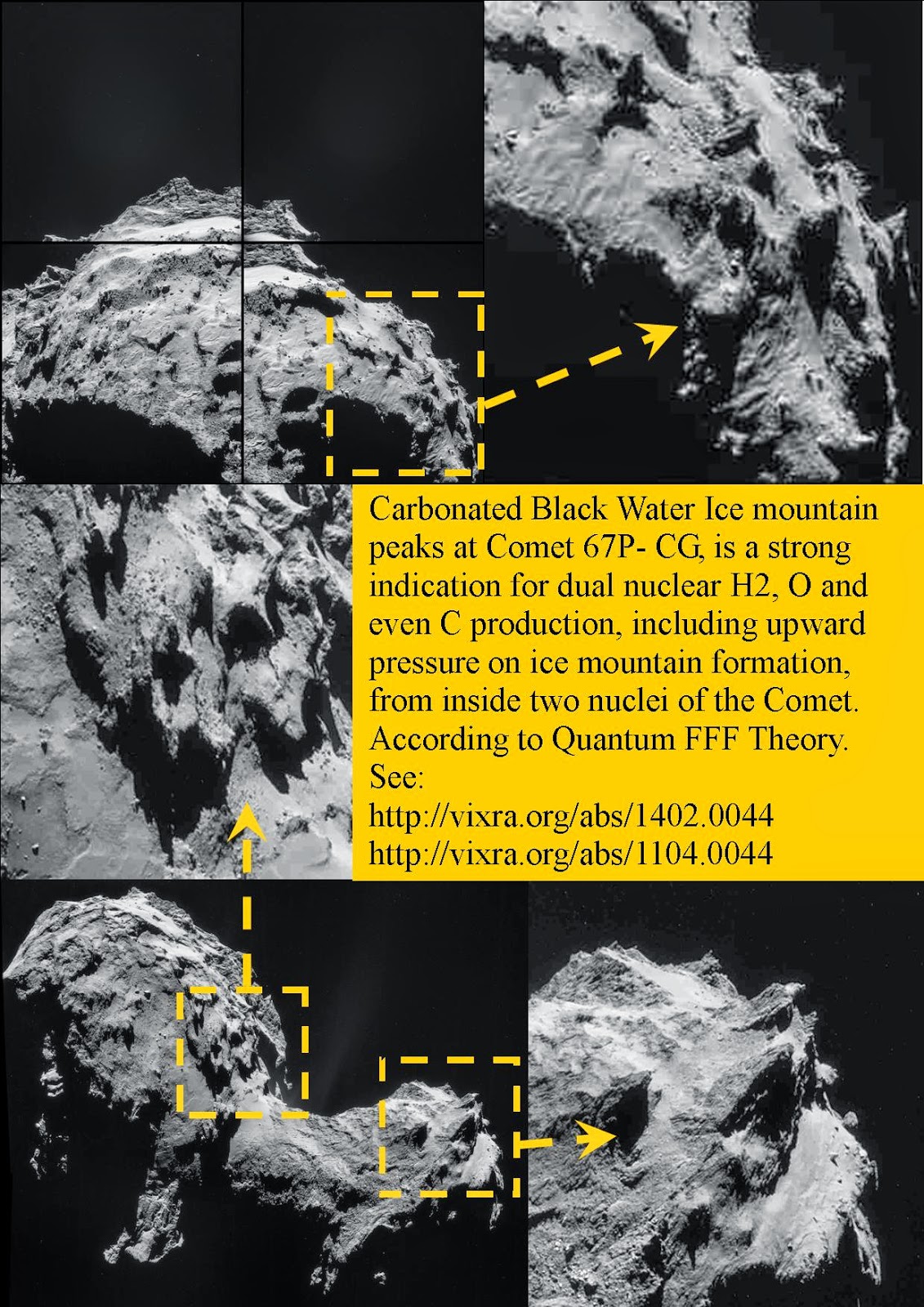 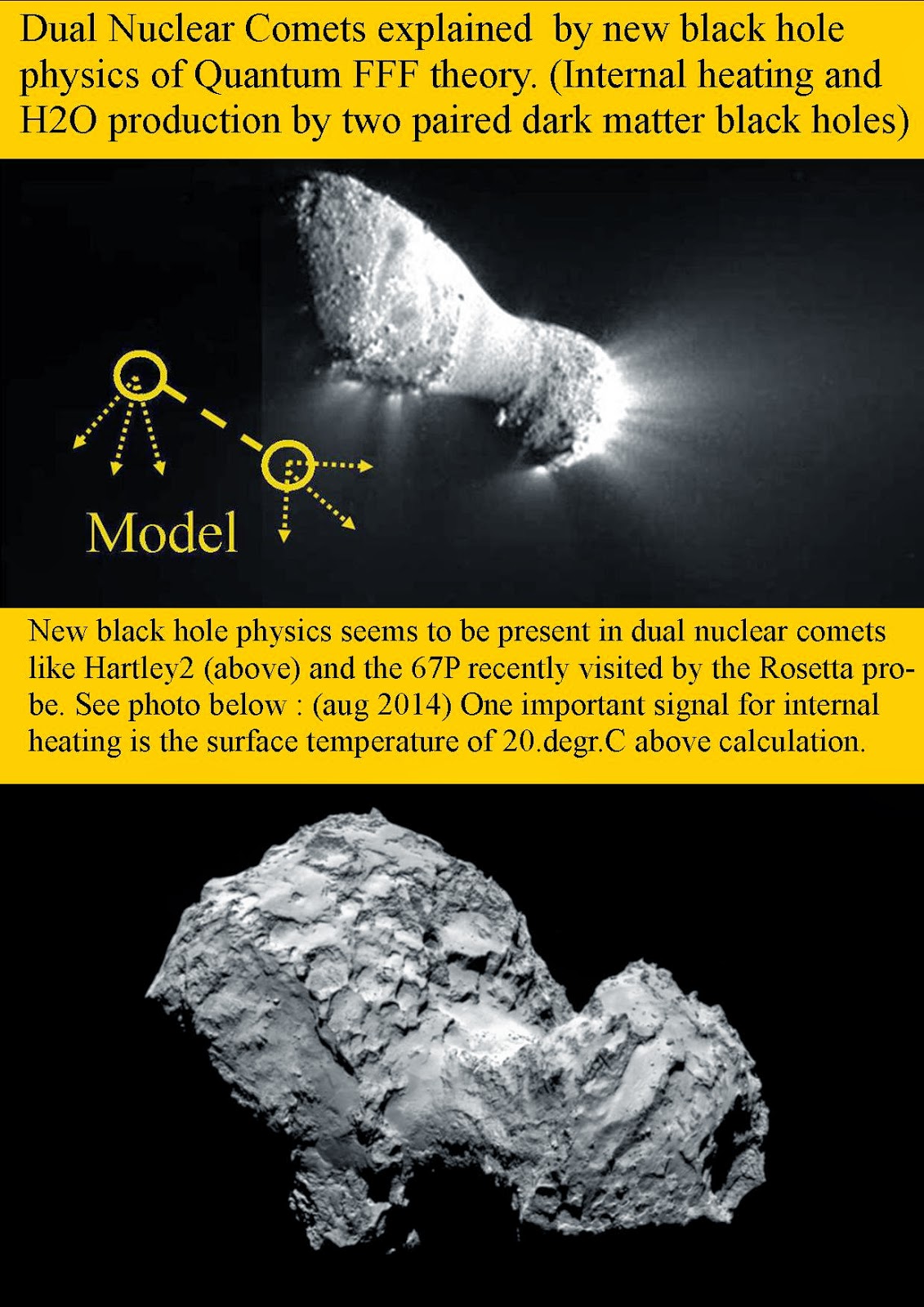 The new black hole physics of Quantum FFF theory, seems to be present in dual nuclear comets like Hartley2 (above) and the 67P recently visited by the Rosetta probe. See photo below : (aug 2014) One important signals for internal heating is the surface temperature of 20.degr.C plus the expected temp.
Both Comets show a relative smooth surface on the "neck" between both globular elements which are more rough surfaced by the proposed production of internal plasma leading to H2O . (Water production ! direct from the Higgs field with convertable Higgs particles into pair production leading to proton electron plasma without much annihilation, see: www.flickr.com/photos/93308747@N05/14351510853/in/photost... )
See also: www.flickr.com/photos/93308747@N05/14058538819/in/photost...
It is assumed that the new physics of dual BH nuclear Comets will show us the way to Free Energy systems! see: www.flickr.com/photos/93308747@N05/8496492955/in/photostream


If Rosetta is able to discriminate  the peculiar dark matter gravity point sources inside 67P-CG, and the intrinsic and internal EM field, then ESA will be able to boost astro- and physics understanding more than Eddington did 95 years ago ( bending of light)
SEE: Schoemaker Levy 9 lessons for Comet 67P CG.
http://bigbang-entanglement.blogspot.nl/2014/09/schoemaker-levy-9-lessons-for-comet-67p.html