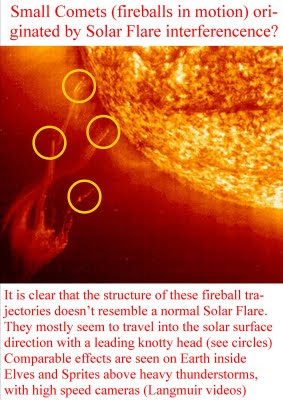 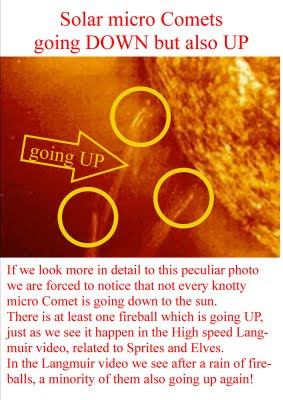 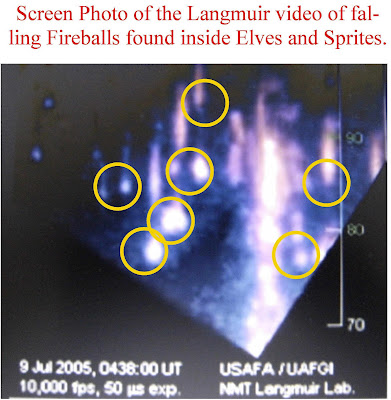 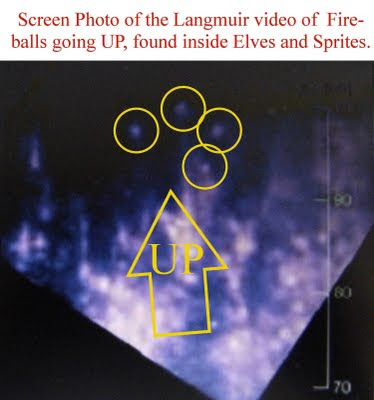 What goes DOWN, sometimes goes UP again.
see:
SPRITES AND ELVES AS THE ORIGIN OF SMALL COMETS AND LARGE BALL LIGHTNINGS
http://migratingblackholes.blogspot.com/2009/02/sprites-and-elves-as-origin-of-small.html

(with The Langmuir video included)

The origin of micro Comets and Ball lightning.
(What goes DOWN sometimes goes UP)

18 years ago during heavy thunderstorm in the Netherlands, a photo camera with automatic shutter recorded strange bead lightning streaks with interesting curvature.
At the end of some streaks a fire ball was visible.
Reconstruction of the curvature of the bead lightning suggested that all the streaks should have some relation to each other and the same frequency.
See: Rigid Gluonium Knots and Ball lightning
http://bigbang-entanglement.blogspot.com/2006/02/3-d-pictures-in-sky-written-by.html

Could it be, that electromagnetic wave interference (with the same wavelength) was responsible for this phenomenon?
The answer was YES if there was also an x-ray (or Gamma-ray) component into play.
Why do we need this x-ray phenomenon? Because not all lightning strokes produce bead lightning or fireball ball lightning.
There must be some irregular component responsible for the incidental emerging of Ball lightning and Bead lightning.
This component could be found in the recent experiment results of professor J.R.Dwyer, ( Geospace physics lab,FIT). He discovered the x-rays emission from laboratory sparks and lightning strokes.
(see: The observation of x-ray bursts produced by 1.5 MV laboratory sparks in air
http://my.fit.edu/~jdwyer/AGU2005poster.doc
Recently also M.Rahman (Upsala university Sweden) made comparable experiments: “x-rays from 80 cm long sparks in air” with x-ray emission results, see:
http://www.lightning.ece.ufl.edu/PDF/AGU/Rahman_et_al_2008.pdf

However, if strong electromagnetic radiation and accompanying x-rays are responsible for ball lightning, then perhaps also (larger) ball lightning effects could be found in space at places with high discharge energies like so called SPRITES and ELVES or even near the solar surface OR NEAR so called BIRKELAND currents ON EARTH.
Judge for yourselves and look at the slow-motion video of Langmuir University of sprites and elves. See under: “Sprites and Elves as the origin of small Comets and large Ball Lightnings”
http://migratingblackholes.blogspot.com/2009/02/sprites-and-elves-as-origin-of-small.html

Sprite scientist described these fireball phenomena in conventional breakdown mechanisms of lightning strokes, such as streamers, down- and upward streamers. Only if streamers collide, then it is called a sprite bead. see: submillisecond imaging of sprite developement an structure. http://people.ee.duke.edu/~cummer/reprints/048_cummer06_grl_hsvsprites.pdf

Postulate:
All Comets, large Comets and even the smaller Sungrazers are originated as fireballs, by Solar electro magnetic field interference near to the solar surface as is shown in the photograph. Some of these Comets where able to produce or gather enough water molecules, during their journey away from the sun, to be influenced by the solar gravity field and become a more or less “Newtonian” elliptical orbit around the sun.
Ball lightning and small Comets are supposed to be produced by the interference of electromagnetic energy found inside Elves and Sprites.
Leo Vuyk.

Galaxy Cannonballs in the early universe, an example of splitting and pairing black holes 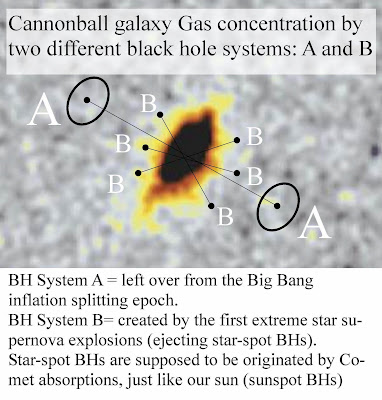 Dual black holes as the electric engine of the universe at all universal scales.
From (Cannonball) galaxies down to starforming regions, HH objects, stars, Comets and Ball lightning. see below.
see also Newscientist video on missing dwarf galaxies :
http://brightcove.newscientist.com/services/player/bcpid1873822884?bctid=35244997001 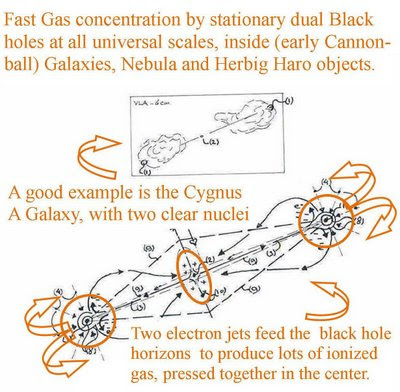 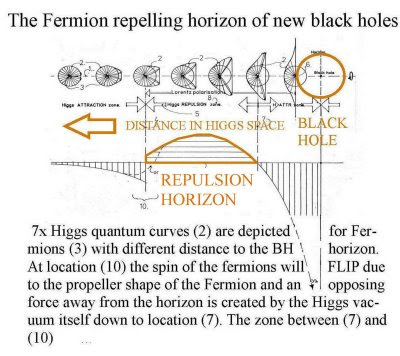 Astronomers have found a new clutch of tiny, dense galaxies that thrived in the early universe. But they still can't explain why the compact objects are nowhere to be found today.
Another team found that compact galaxies were still present when the universe was almost 5 billion years old, narrowing the amount of time that such galaxies would have to puff up to present sizes. (Newscientist) see:
http://www.newscientist.com/article/dn17281-cosmic-cannonballs-found-in-early-universe.html

Black holes equipped with a Fermion repelling horizon seem to be able to pair and stay concentrated in groups with a gas compression zone in between. 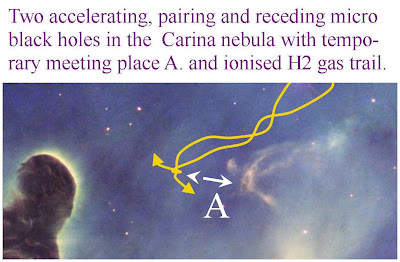 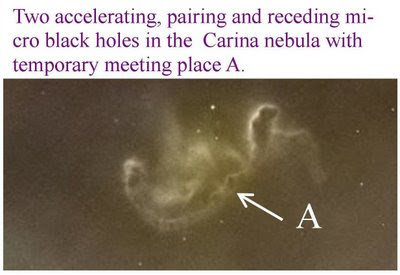 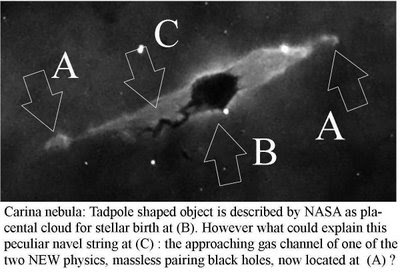 PUFFING UP GALAXIES
Black holes equipped with a Fermion repelling horizon seem to be able to pair and stay concentrated in groups with a gas compression zone in between.
The “puffing up” of older galaxy or the expansion of the older galaxies with stellar halos, must be the result of the fast production of huge stars and medium sized supernova Black holes.
The stellar “sunspots” (micro cometary black holes) ejected during supernova explosions are supposed to be the origin of puffing up our present day Nebula in the form of Herbig Haro objects, the base for new open star clusters 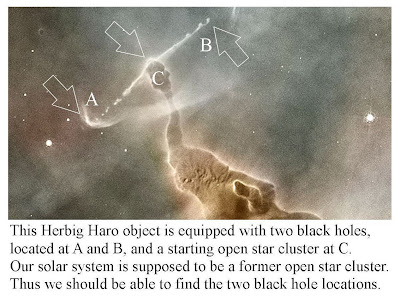