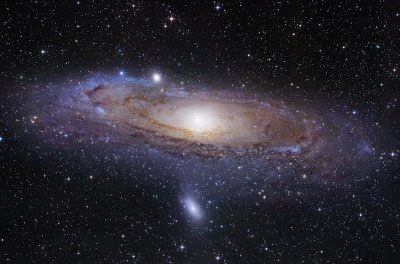 It is well established that X-ray production should be present around black-hole sources due to interaction with local gas.
As a consequence we observe black hole locations around gaseous galaxies in space by x-ray images taken by the CHANDRA satellite.
Andromeda, (M31) and the Sombrero galaxy seem to be excellent examples. .
However in both cases the brightest x-ray sources are located far outside these galaxies.
This seems to be a clear support for a NEW black hole theory.
M31, with multiple x-ray hotspots (GABHs) around the galaxy. 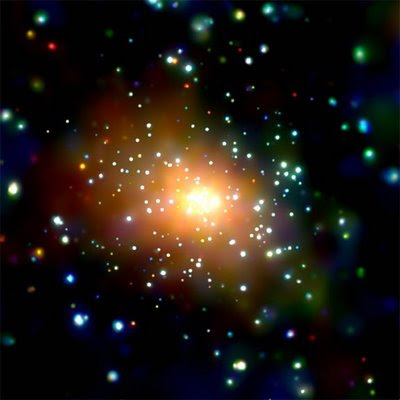 Chandra x-ray image of Andromeda (above) with multiple x-ray hotspots (Galaxy Anchor black holes) around the Galaxy.
Most of the M31 x-ray sources are identified as Globular Clusters (GCs), obviously equipped with at least one central black hole.
As a matter of fact astronomers concluded that:
The brightest M31 x-ray (GC) sources tend to reside at large galactic distances outside the central bulge. See:
http://adsabs.harvard.edu/abs/2004AAS...204.4917T
The X-ray dots are DECREASING IN DIAMETER towards THE CENTER OF THE GALAXY! This is a firm support for a NEW black hole theory introducing Fermion repelling horizons and massless Black holes.!
Evidence for external Galaxy Anchor Black Holes (GABHs)
see also:
http://bigbang-entanglement.blogspot.com/2006/04/mainstream-physics-is-not-able-to.html
Galaxy Form and Formation by dual NEW black holes.
Geplaatst door Leo Vuyk op 02:10 No comments: Links naar dit bericht

THE MILKY WAY CENTRE: NO GIANT BLACK HOLE ?!! inside young galaxies ONLY SMALL ONES! 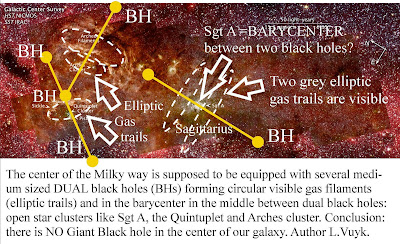 If we explore this interesting image (see above) and the correlated text, we seem to miss any trail of a central giant black hole lurking.
HOW CAN?
WE CAN, IF WE CHANGE OUR STANDARD MODEL and ideas A LITTLE BIT.
SEE:
http://bigbang-entanglement.blogspot.com/2006/04/mainstream-physics-is-not-able-to.html
The center of our Galaxy and the giant black hole, is by the mainstream logically supposed to be located at the hart of Sagittarius A open star cluster see the star accelerations around the Sag A, the red cross :
http://www.einstein-online.info/en/spotlights/milkyway_bh/index.html
http://antwrp.gsfc.nasa.gov/apod/ap081211.html
So if a giant black hole is located inside Sag A, it would be expected that around Sag A the gaseous structure of space around Sag A is strongly influenced by that Giant and e.g. lots of swirling gas trails are visible which is not .
The only visible trails are two elliptic grey filaments which could be the tell tails of two medium sized black holes, just as is suggested to be the origin of the other elliptic filaments visible around the two other open star clusters. (called Quintuplet and Arches cluster)

If black holes differ a little from the mainstream assumption, then there is a firm reason to suggest that the star accelerations also are possible in the middle TWO or even more DUAL medium sized black holes.
See also: http://bigbang-entanglement.blogspot.com/2006/04/mainstream-physics-is-not-able-to.html

NO GIANT black hole inside the Galaxy center?
The mainstream ideas about a Giant Milky way- central black hole are lately firmly supported by clear stellar acceleration profiles around the Sagittarius A cluster, see:
http://www.einstein-online.info/en/spotlights/milkyway_bh/index.html

However according to new combined Hubble images of the Sgt..A area there is no sign of any gaseous filamentary Vortex or elliptic structure.
Instead we see more than one clear elliptic filaments around the three stellar clusters called: Sagittarius A, Quintuplet and Arches cluster.
This seems to be a tell tale for more than one (at least three) barycentres as the origin of these open star clusters.
My conclusion based on a new interpretation of black hole splitting and paring
The center of the Milky way is supposed to be equipped with several medium sized DUAL black holes (BHs) forming circular visible gas filaments (elliptic trails) and in the barycenter in the middle between dual black holes: open star clusters like Sgt A, the Quintuplet and Arches cluster. Conclusion: there is NO Giant Black hole in the center of our galaxy.
http://migratingblackholes.blogspot.com/2009/01/milky-way-centre-no-giant-black-hole.html
The text below related to this image was made by: Astronomic picture of the day. http://antwrp.gsfc.nasa.gov/apod/ap090107.html

The Galactic Core in Infrared Credit: Hubble: NASA, ESA, & D. Q. Wang (U. Mass, Amherst); Spitzer: NASA, JPL, & S. Stolovy (SSC/Caltech)
Explanation: What's happening at the center of our Milky Way Galaxy? To help find out, the orbiting Hubble and Spitzer space telescopes have combined their efforts to survey the region in unprecedented detail in infrared light. Infrared light is particularly useful for probing the Milky Way's center because visible light is more greatly obscured by dust. The above image encompasses over 2,000 images from the Hubble Space Telescope's NICMOS taken last year. The image spans 300 by 115 light years with such high resolution that structures only 20 times the size of our own Solar System are discernable. Clouds of glowing gas and dark dust as well as three large star clusters are visible. Magnetic fields may be channeling plasma along the upper left near the Arches Cluster, while energetic stellar winds are carving pillars near the Quintuplet Cluster on the lower left. The massive Central Cluster of stars surrounding Sagittarius A* is visible on the lower right. Why several central, bright, massive stars appear to be unassociated with these star clusters is not yet understood.
This description "NOT YET UNDERSTOOD" is in sharp contrast with former releases of the ESA study of 16 years on the center of the Galaxy, presented earlier, talking about the proof of the giant lurking black hole inside the Sagitarius complex see:
http://antwrp.gsfc.nasa.gov/apod/ap081211.html
Geplaatst door Leo Vuyk op 12:29 No comments: Links naar dit bericht