9-Questions about the Multiverse, based on Q-FFF theory.

9-Questions about the Multiverse.

1: Is Dark Matter the same as Black Holes of all sizes which consume photons and gravitons, repel fermions and have negative electric potential at the outside and positive potential at the inside?.
2: Is Dark Energy the same as the oscillating Higgs Field with Casimir repelling effect and repulsive gravity potential?.
3: Is Quantum Gravity based on a dual Casimir-Graviton push system ? (Higgs-Casimir push opposing Graviton push is as a result attraction?). Is this dual push system the base for all forces?
4: Is the Big Bang a symmetric (entangled matter- anti-matter-multiverse ) splitting Dark Matter Black Hole (DM-BH) into smaller primordial DM-BH Splinters and evaporating into the oscillating Dark Energy Higgs field.
5: Is the Big Bang self organizing and quiet inflating, by the splitting and pairing DM-BHs which could be able in succession to produce all the universal plasma and dual BH based Herbig Haro systems as a base for stars in open star clusters and as a start for Spiral Galaxies and the Lyman Alpha forest?
6: Is the dual DM-BH based spiral galaxy able to merge with other spirals to form elliptical systems and are the DM-BHs able to anchor the galaxy in the middle and coined: Galaxy Anchor Black Holes ( GABHs)?
7: Is a GABH still able to form pairs and produce plasma after Galaxy Merging and create Dwarf galaxies in between, but outside the main galaxy?
8: Is a sub-quantum structure of elementary particles able to explain all particle decay trajectories and the repulsion of fermions at the black hole horizon by so called spin flip?
9: Is the vacuum structure chiral and responsible for the fact that we live inside a material bubble of the (CP) symmetric multiverse?
(related to Quantum FFF Theory ( Function Follows Form)
http://vixra.org/author/leo_vuyk

Ball Lightning and the Big Bang have similarities, both are evaporating and splitting black holes. Evaporating into the oscillating Dark Energy Higgs Field and Splitting into smaller Dark Matter Black Hole nuclei. 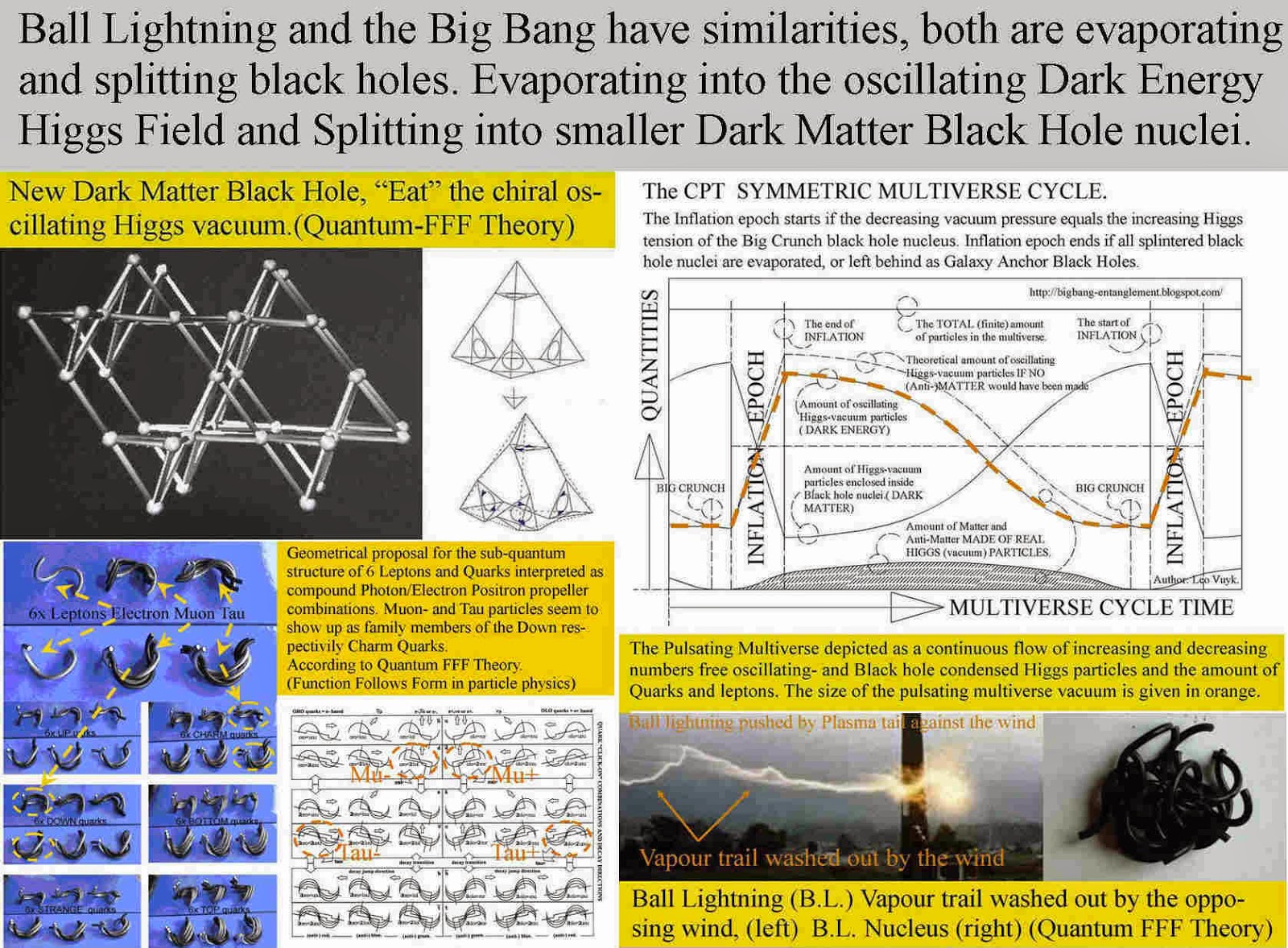