According to Quantum FFF Theory ( Function Follows Form) star formation of Dwarf galaxies is the product of cooperating dual new paradigm dark matter black holes in the form of large dual Herbig Haro objects.
These HH objects are supposed to be the dual primordial Galaxy Anchor Black Holes ( GABHs) kept at opposing sides of galaxies by the electric pressure of a system of dual jets as often observed in HH systems.
In the centre of the galaxy there is a so called White hole active, also able to attract matter but without lots of gamma rays.
These new paradigm GABHs should have produced most of the gas and dust concentrated inside the central galaxy.
After galaxy merging, these multiple GABHs are supposed to interact outside the central galaxy and form DWARF galaxies in between. These dwarfs have a more or less stable position outside the galaxy, dependant of the decline of the central jet pressure on the GABHs. By supernova production of small black holes inside the dwarfs, a secondary Dark Matter Black Hole system emerges inside the Dwarf, producing new gas and dust out of the Higgs vacuum with accompanied e-e+ annihilation and consequently gamma rays.
See:
Detection of gamma rays from a newly discovered dwarf galaxy may point to dark matter.
http://phys.org/news/2015-03-gamma-rays-newly-dwarf-galaxy.html 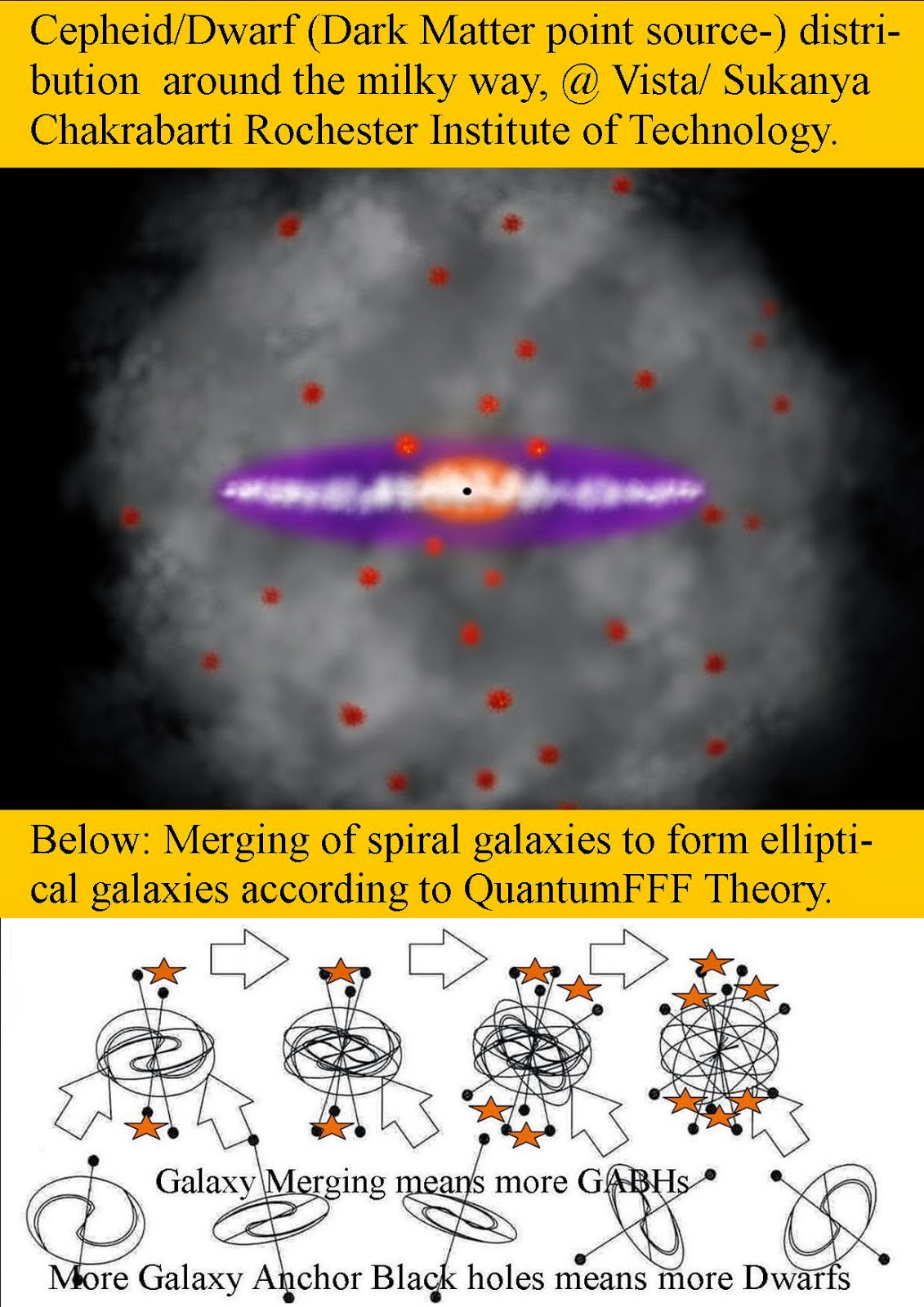 Extract of my Quantum Function Follows Form model.
1: Black holes are the same as Dark Matter, they all consume photons, even gravitons and the Higgs field, but REPEL Fermions due to their propeller shape. They produce electric charged plasma.
2: Dark Energy is the oscillating ( Casimir) energy of the Higgs Field equipped with a tetrahedron lattice structure with variable Planck length, increased around black holes..
3: Quantum Gravity = Dual Push gravity= Attraction (Higgs-Casimir pressure opposing Graviton pressure ).
4: The Big Bang is a Splitting dark matter Big Bang Black Hole (BBBH), splitting into smaller Primordial Big Bang Splinters (PBBS) forming the Fractal Lyman Alpha forest and evaporating partly into a zero mass energetic oscillating Higgs particle based Higgs field.
5: Dual PBBSs hotspots, produce central plasma concentration in electric Herbig Haro systems as a base for star formation in open star clusters even as a start for primordial Spiral Galaxies and galaxy clusters.
6: Spiral Galaxies will keep both Primordial Dark Matter Black Holes as Galaxy Anchor Black Holes (GABHs) connected by dual jets at long distance: (Milky Way= 27k Light years, based on recent observation)
7: After Galaxy Merging, these GABHs are the origin of
Galaxy- and Magnetic field complexity and newly formed dwarf galaxies in between GABHs
8: Black Holes produce Plasma direct out of the Higgs field by pair production. Two high energy Higgs particles ( by fluctuations at BH horizons) are convertible into symmetric electron and positron (or even dual quark-) propellers.
9: The chirality of the (Left Handed spiralling) vacuum lattice is the origin our material universe. Consequently A; propeller shaped positrons merge preferentially first with gluons to form (u) Quarks to form Hydrogen, B: neutrinos are always left handed .
10: The first Supernovas produce medium sized electric dark matter Black Holes as the base for secondary electric Herbig Haro systems the base for open star clusters.
11: ALL Dark Matter Black Holes are supposed to be CHARGE SEPARATORS with internal positive charge and an external globular shell of negative charged Quark electron plasma.
12: The light speed is related to gravity fields like the earth with long extinction distances to adapt with the solar gravity field both acting as reference frames. (See radar reflection anomaly on Venus)
13. Quantum FFF Theory states that the “raspberry shaped multiverse” is symmetric and instant entangled down to the smallest quantum level. Also down to living and dying Schroedinger CATS.
14 Large Primordial Big Bang Splinters (PBBS) are responsible for the creation of the Lyman Alpha forest structure and first spiral galaxy forming of the universe, but they seem to be also responsible for the implosion of the universe by the absorption of the Higgs field, in the form of Galaxy Anchor Black Holes (GABHs) located mainly outside galaxies. see: (See Quasisoft Chandra sources)
15, As a consequence of 12-14, Time is always local time in combination with cyclic period time of the multiverse.

16, If our material universes has a chiral left handed oscillating Higgs field, then our material Right Handed DNA helix molecule could be explained.
However it also suggests that in our opposing ANTI-MATERIAL multiverse neighbour universe the DNA helix should have a Left handed spiral.
According to Max Tegmark: in an entangled multiverse we may ask: is there COPY PERSON over there, who is reading the same lines as I do?
If this COPY person is indeed living over there, then even our consciousness should be shared in a sort of entangled DEMOCRATIC form,
Then we are not alone with our thoughts and doubts, see:
Democratic Free Will in the instant Entangled Multiverse.
http://vixra.org/pdf/1401.0071v2.pdf

17, All particles and waves should be entangled with anti-copy particles and Higgs field based waves in our opposing anti universes.


Then wave particle duality and the so called one particle double slit interference could be explained by accepting that real shaped 3D photon particles only exist in their function of Gluons. However Gluons should transfer form information to the oscillating luminiferous Higgs field ether, within about distance from a fermion.(see: Babock and Bergman anomaly,1964)
Geplaatst door Leo Vuyk op 07:23 Links naar dit bericht 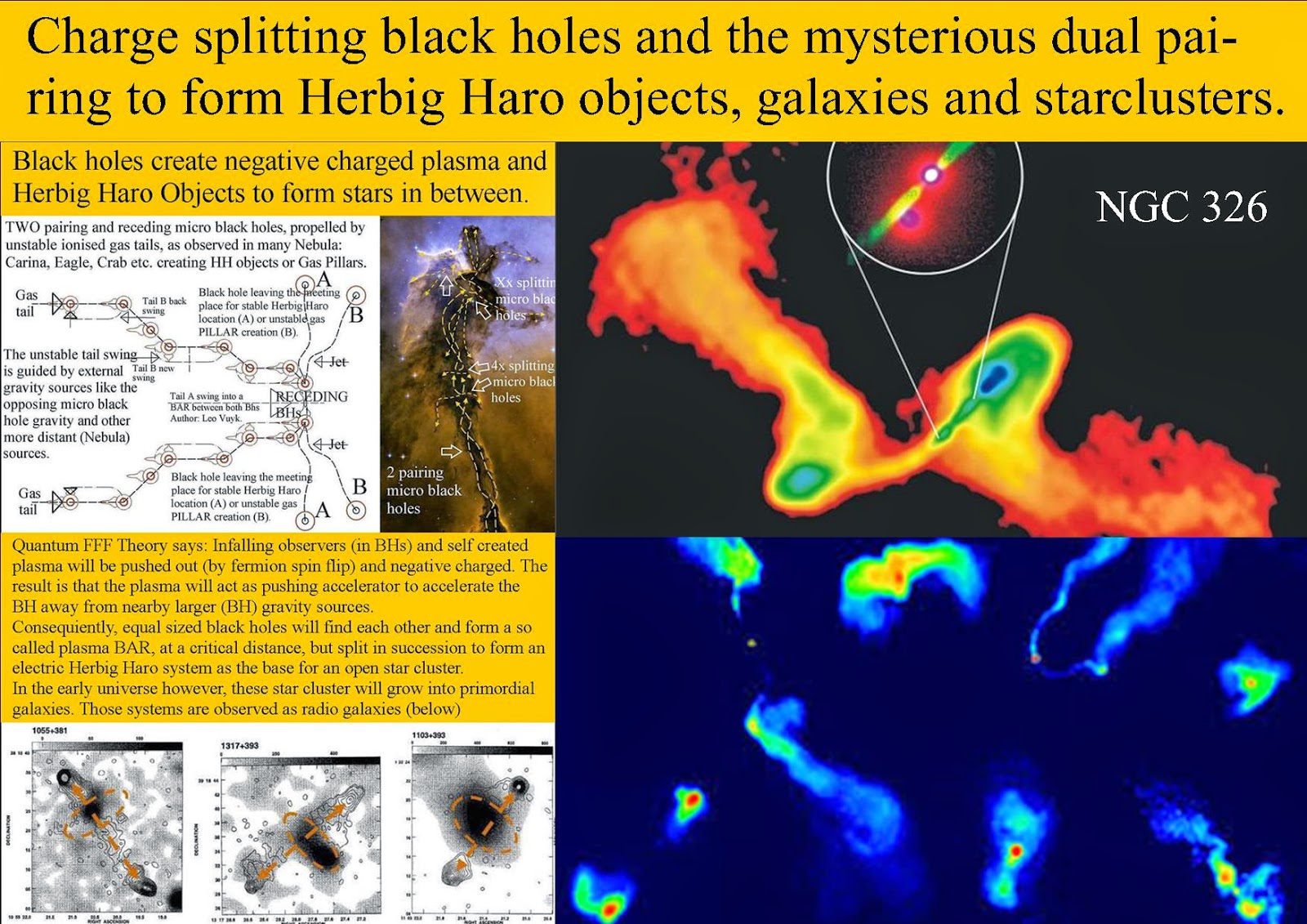 I think that Hawking did not calculate with the possibility of a chiral oscillating Higgs field vacuum lattice combined with propeller shaped Fermions. Electrons and positrons  both pushed away from the BH horizon at different distances, forming TWO different charged separated  spheres. With quark ( plasma) formation in between.
WHY is this possible?
ONLY if the oscillating Higgs vacuum Lattice (tetrahedral shaped) has a preferred chirality. So in our MATERIAL universe, all the Planck lattices ( the edges of the tetrahedrons) FORM A LEFT HANDED SPIRAL. As a result all neutrinos are left handed! because the neutrino information travels  in the form of an Higgs oscillation along these edges.
SEE: https://www.flickr.com/photos/93308747@N05/11417545035/in/photostream

At the same time, positrons must have a preferred spin (OLO left=L) they catch a Gluon to form a u-quark ( OLO+ROR) which is better protected for the aggressive oscillations of the left handed Higgs field than an electron ORO combined with the mirror Gluon LOL forming a right handed anti- d-Quark!
So New Black Holes are CHARGE SPLITTERS vi  olating the 2e law, combined with a micro big bang plasma creation process!
SO: Quantum fluctuations around the BH horizon produce pairs of leptons. e-,e+ and even compound quarks (d,u, etc, see Fermion 3D string propeller theory: Fermion repelling by Lorentz polarized spin flip).  ( see also Vixra "mass in motion")
For tripple BH horizons see image nrs 7, 10 and 11.  Event horizon=7, Inner photon ring = 10, Outer photon ring = 11.
Conclusion The Big Bang did not produce instantly all the Fermions in the universes. Even now lots of Fermions are produced- in the form of negative charged plasma- by all BHs (see ball lightning) even the largest primordial Big bang splinters located outside large galaxies. see also: image225, and
Parity and Chirality as a Base for Quark-Gluon Plasma Creating and Charge Splitting Black Holes.
http://vixra.org/abs/1502.0086 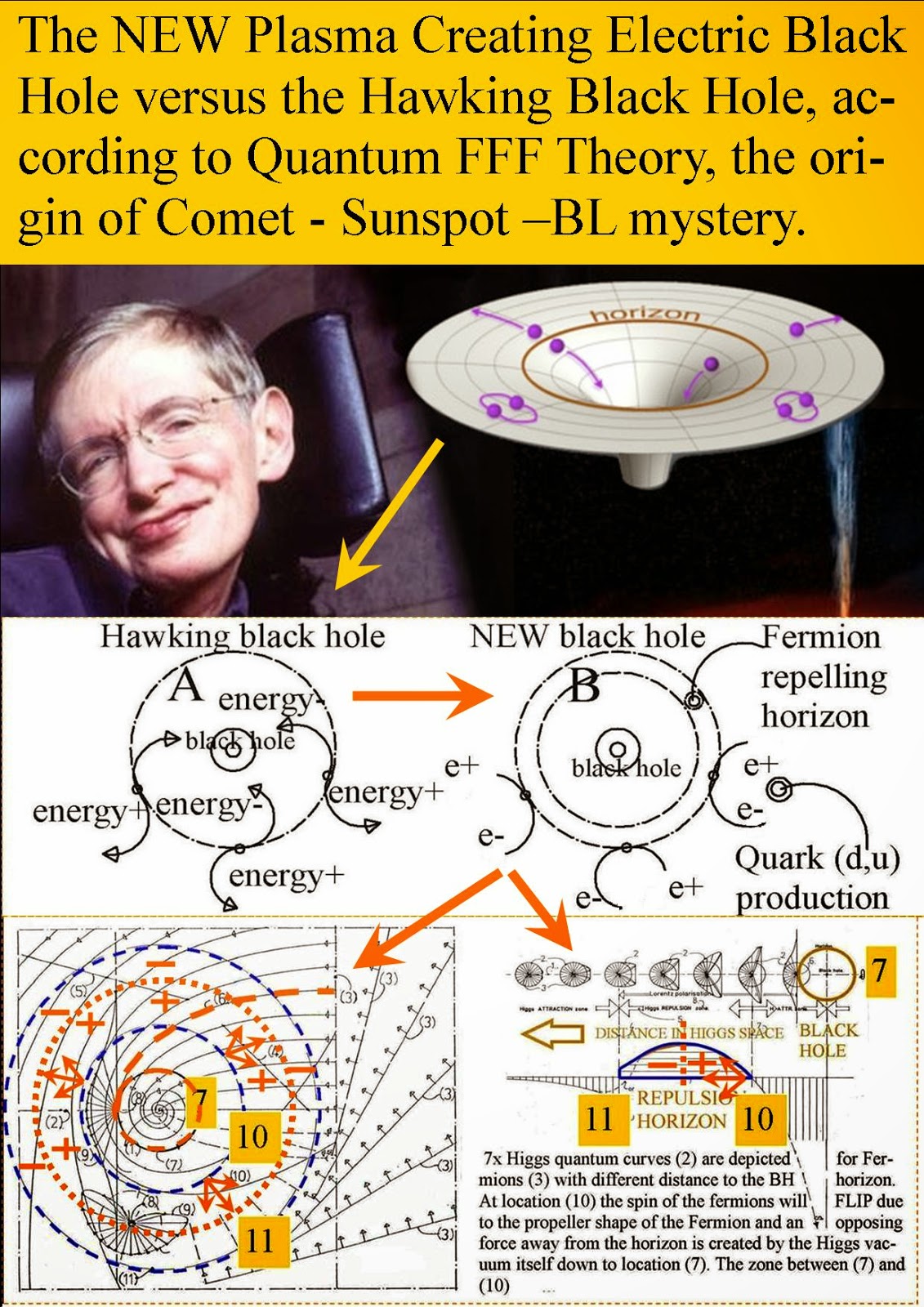