If we accept the Quantum mechanical idea of the vacuum creation of Lepton pairs around a black holes, then only a minimal amount of (anti-)Leptons is supposed to be annihilated in the Comet case.
This is possible if the vacuum Higgs lattice has a chiral structure in combination with an opposite chirality for Leptons and Fermions!
As a result “left handed” chiral Positrons tend to "absorb" easier and more Gluons/Photons than Electrons do inside a “left handed” chiral vacuum.
Positrons seem to be able to form positive Quarks by "click-on" Gluon/Photon absorption. This "click-on" system facilitate Electrons to form negative charged Quarks.
This simple principle solves even the well known Big Bang anti-matter annihilation problem!
As a result, COMETS are spongy icy H2 balls created around micro black holes by the Quark Gluon plasma producing Black Hole horizon. 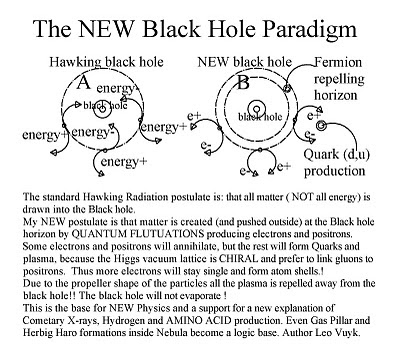 As a result, the positron has better chances to become a stable QUARK (by photon/gluon addition) than the electron. see: The CPT symmetric Multiverse by black hole Big Bang evaporation:

For particle models, see:
http://bigbang-entanglement.blogspot.com/2007/01/introduction.html
According to this model, Micro black holes are supposed to show up as Ball lightning, Comets and Herbig Haro objects.
The NEW Hawking radiation presented here, goes back to 1973.
Soviet scientists Yakov Zeldovich and Alexander Starobinsky showed Hawking in 1973, that according to the quantum mechanical uncertainty principle, rotating black holes should create and emit particles.
My interpretation of the Higgs vacuum is that Black holes don't need rotation to repell all particles created by vacuum fluctuations due to their propeller structure and are even able to form QUARKS BY A NEW STANDARD MODEL of "click-on"photons/Gluons.
see: http://bigbang-entanglement.blogspot.com/
Conclusion both QUARKS ( d and u) are created all together with electrons and positrons.
Hydroxyl (OH), Hydrogen and even complete water molecules seem to be possible as is found in Comets. This production of water by the micro black hole is supposed to be the real compensation for the continuous loss of water molecules by Comets.
Conclusion: Comets harbour micro black holes in their nuclei.
X-ray and even annihilation radiation effects are also a logic result of Comets. However, no annihilation radiation is found related to Comets untill now. 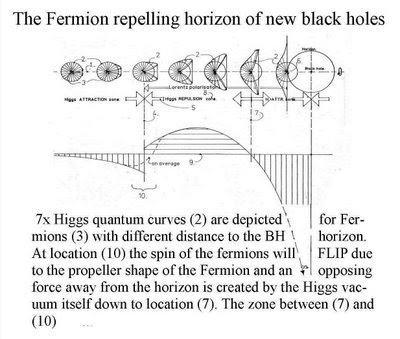 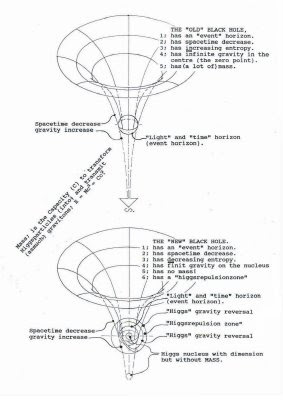 ARE COMETS MICRO BLACK HOLES WITH a dirty snowball cover and a NUCLEAR X-RAY PRODUCTION? 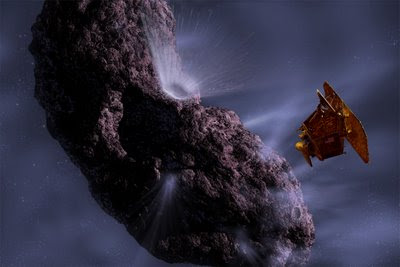 Scientists are stumped by the behavior of the comet Tempel 1 after NASA sent the Deep Impact space probe hurtling into it last year some 83 million miles (133.5 million kilometers) from Earth.
The flare that resulted from the July 4 2005 collision was originally measured by optical telescopes as being a weak, five-day-long burst.

This suggested that only a small amount of water and other material had been released after impact.

But an analysis of x-ray images taken after the collision indicates that the flare lasted for a full 12 days and released about 250,000 tons (226,800 metric tons) of water in the form of ice-covered dust grains.

"There was disappointment that Deep Impact didn't cause a major optical outburst, but it did cause an x-ray outburst. Why that is, we don't know,'' said Dick Willingale, an astronomer at the University of Leicester in England whose team operated NASA's Swift X-Ray Telescope.

Willingate's team is puzzled as to why the x-ray observations of the impact's aftermath do not match the observations made by optical telescopes.

"When everyone said it was over, we were [actually] at the peak. We were just taking the data,'' Willingale said. "We realized we had something strange happen, but we didn't understand why.

"The important thing is [the flare] lasted for 12 days,'' Willingale continued. "It shouldn't have done that. The water was coming off so fast, it should've disappeared after a day or so. We don't know why [the strong x-rays] persisted for so long.!!

The solution could be: that the deep impact made a temporary hole in the Comet crusty surface and uncovered the micro black hole x-ray radiation produced by the micro-Black hole Hydroxyl production around the nucleus.


THE FIRST X-RAY DISCOVERY OF COMETS.

X-Rays from Comet LINEAR Credit: Carey Lisse (STScI/UMD) et al., CXC, SAO, NASA
Explanation: Why do comets emit X-rays? First discovered during the passing of Comet Hyakutake in 1996, the reason a cold comet would produce hot X-rays has since remained a mystery. On July 14 2000, however, the orbiting Chandra X-ray Observatory was able to provide an image of passing Comet LINEAR, shown above, in enough detail to unravel the mystery. The key to the solution turns out to be the unusual wind of fast ions emitted by our Sun. These ions apparently collide with gas recently emitted by the comet and cause some ions to acquire a new electron. An electron that starts in a high-energy state will emit an X-ray as it falls in closer to the ion nucleus. As other comets move into the inner Solar System, this discovery should allow future study of the continually evolving gas cloud that surrounds comets as well as the composition of the solar wind. 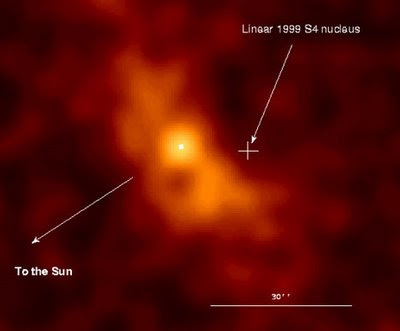 THE MOST RECENT X-RAY OBSERVATION OF A COMET:
NASA SWIFT spots Lulin Comet: see:
http://www.nasa.gov/mission_pages/swift/bursts/lulin.html
This image of Comet Lulin taken Jan. 28 2009, merges data acquired by Swift's Ultraviolet/Optical Telescope (blue and green) and X-Ray Telescope (red). At the time of the observation, the comet was 99.5 million miles from Earth and 115.3 million miles from the sun. Credit: NASA/Swift/Univ. of Leicester/Bodewits et al. 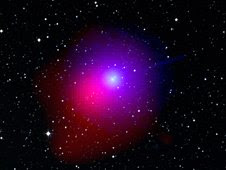 THE GRAIN PARTICLES OF COMET WILD 2.

About 10 percent of the mass of Wild 2 is estimated to be from particles transported out from hot inner zones to the cold zone where the comet formed. Researchers conclude that this is how these grains with unusual isotope ratios go incorporated into a comet.

Earlier research showed that the comet formed in the Kuiper Belt, outside the orbit of Neptune, and only recently entered the inner regions of the solar system.

But during its lifetime, Wild 2 gathered material that formed much closer to the sun.
http://www.topnews.in/parts-comet-wild-2-formed-close-sun-211382

This is an indication that Comets are not formed in the Kuiper belt but simply by solar interference and after black hole creation an Solar evaporating of its dirty ice nucleus will split and dye out like the Schoemaker comet.
From July 16 through July 22, 1994, pieces of an object designated as Comet P/Shoemaker-Levy 9 collided with Jupiter.